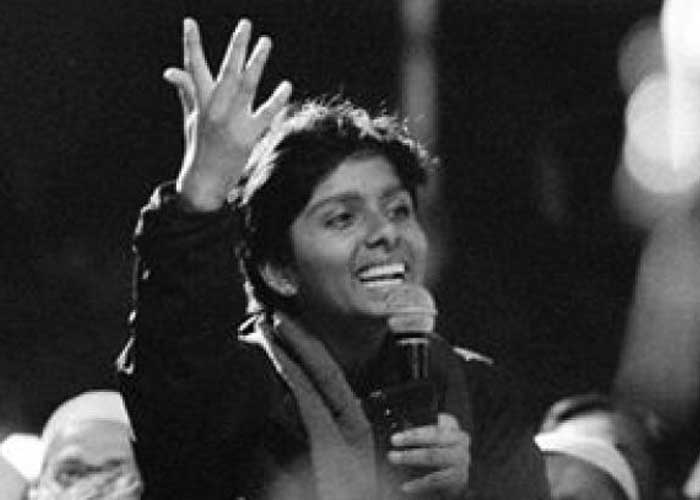 Amulya, the 19-year-old college student, who triggered national outrage by shouting “Pakistan zindabad” at an anti-CAA rally here a day ago, is a prolific anti-establishment activist, online and offline.

A detailed look at her social media accounts reveal a lot about her activism.

She was also one of the three women who heckled right-wing tweeter Mahesh Ganesh Hegde on January 31 at the Mangaluru airport. Amulya was with activists Kavita Reddy and Najma Nazeer asking Hegde to sing “Vande Matharama.

Sharing the video from the airport on her twitter account, Amulya said: “Excerpts of today’s event with @mvmeet, that people haven’t seen yet.”

Hailing from Koppa, a small town in Karnataka’s Chikkamagaluru, she worked earlier as a translator and interpreter in a Bengaluru recording company.

A BA second year student in Nagarathnamma Meda Kasturiranga Setty Rashtreeya Vidyalaya College for Women (NMKRV) in the city’s upscale Jayanagar suburb, Amulya, who has 2,400 followers on Twitter since joining in December last year as per her profile, has put out several satirical posts on the BJP-led NDA government and legislations, besides listing the venues for protests planned in the city.

After the Aam Admi Party (AAP) trounced the Bhartiya Janata Party (BJP) in the February 8 Delhi Assembly elections, Amulya tweeted that “the people of Delhi voted for good governance”.

Sharing former BJP leader Yashwant Sinha’s tweet on “how low would BJP sink in order to win the Delhi elections”, Amulya said: “Wait a minute. I was thinking they (BJP) are already at their lowest.”

She also flagged in the social media the lack of representation for backward classes, Dalits and minorities in the higher echelons of the judiciary.

Clarifying her stance on the Citizenship Amendment Act (CAA) recently, Amulya tweeted: “We are not against giving citizenship to the persecuted. Our fight is being misinterpreted by the media and politicians of Congress and BJP.”

“We are fighting against religion-based allotment of citizenship under CAA. We want to shelter all the persecuted.”

Amulya proactively shares pictures, memes and retweets on a daily basis on several topics, drawing attention of Twitterati in the virtual world.

Not one to confine to politics, Amulya, earlier this month, also tweeted in support of the Thubrahalli slum-dwellers in the city’s eastern suburb.

“We have received over 30 calls from Thubrahalli slums. They are very scared, as the circle inspector warned them to vacate within 2 days or be ready for action,” she posted.

Amulya lent her voice to the state-run Indian Institute of Management-Calcutta (IIM-C) students protesting exorbitant tuition fee, hiked every year since 2010. She also shared a picture and a news report of the protesting students.

For appealing to a wider audience, Amulya tweets in Kannada and English and posts in both the languages on her Facebook account.

She is also a WordPress blogger where she shares her poetry.

“Writing poems is one of my hobbies. Through write-ups, I try to navigate the people’s focus on social issues. This is my small attempt to change the inner me and society with words and rhymes,” Amulya said introducing herself on her WordPress page.

On the fateful Thursday when Amulya shocked the organisers as well as the gathering with her pro-Pakistan slogan, she shared details of the Bilal Bagh protest in the city’s eastern suburb against CAA and mentioned that “AIMIM president and its Lok Sabha member from Hyderabad Asasuddin Owaisi will join protesters between 12 p.m. and 5 p.m”.

Two days ago (Wednesday), Amulya shared a picture of Maratha king Chatrapati Shivaji and posted on his birth anniversary.

On Thursday, Amulya retweeted a message from Srivatsa which said: “13 navy sailors arrested for spying for Pakistan. No TV debates, no front-page headline. Why? Because they are not Muslims”.

Meanwhile, Amulya is facing a barrage of criticism from tweeple for her ‘Pakistan Zindabad’ slogan.

Shaheen Baaghi tweeted, “Yesterday, a stupid teenager praised a terrorist country in slogans and booked a seat in jail.”

However, there were some more nuanced reactions.