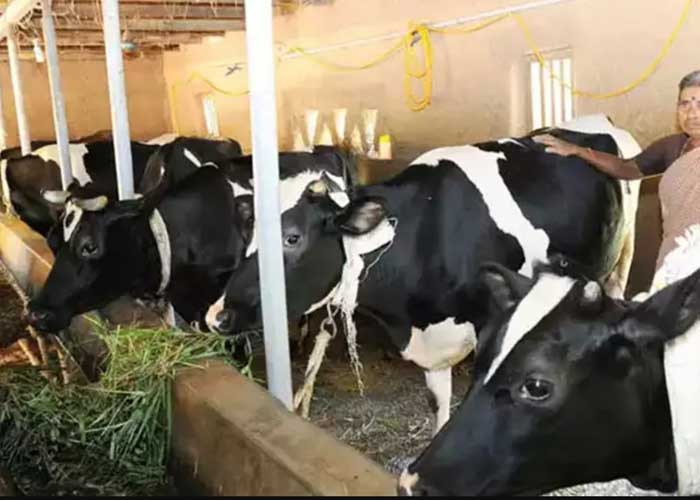 Atul Chaturvedi, Secretary in the Union Ministry of Animal Husbandry, Dairying and Fisheries, on Thursday said that the animal husbandry and dairy departments could contribute significantly in achieving the Modi government’s goal of doubling farmers’ income by 2022 as the government is paying special attention to this sector.

Chaturvedi said that the dairy sector has the power to increase the income of farmers by four times and this branch of agriculture is going to be a ‘game changer’ in the coming days.

“If the animal husbandry and dairy sectors work in right directions, it can not only help in doubling farmers’ income but also augment it to four times within five years”, he said.

“There is still a need for more attention to this sector. Our current government is planning to take a game changing step in this direction and we will see the reforms in coming days,” Chaturvedi said.

Referring to the National Animal Disease Control Program (NADCP) and the National Artificial Insemination Program which were recently launched in Mathura by Prime Minister Narendra Modi, the 1986 batch IAS officer of the Assam and Meghalaya cadre said that keeping in mind the immense possibilities in this sector, the Modi government is paying special attention to it.

He said, “So far no other country has embarked on such an ambitious livestock disease prevention scheme.”

Chaturvedi, who took over as Animal Husbandry and Dairy Secretary about two and a half months ago, said that under this program 51 crore cattle will be given vaccination for foot and mouth disease twice a year, which means cattle will be vaccinated 102 crore times in a year. Apart from this, 3.6 crore vaccines of Brucellosis will also be administered to prevent the disease.

“A total of 105.6 crore vaccines will be administered to cattle in a year for these two diseases. Like polio eradication, this program of animal immunization is also being carried out in a mission mode. It is the world’s unique program, which has also been appreciated by the World Animal Health Organization OIE (Office International des Epizooties), he added.

He said the Foot and Mouth disease (FMD) is a severe, highly contagious viral disease of livestock that has a significant economic impact, causing a loss of about Rs 20,000 crore annually to farmers and a loss of Rs 30,000 crore due to Brucellosis. Farmers can be benefited on a large scale by controlling these diseases once the vaccination program starts. Our government has set the free India of Foot and Mouth Disease target by 2022.

Chaturvedi added that more than Rs 13,000 crore will be spent on eradication of these two diseases in five years which caused Rs 50,000 crore annual loss.

He said, “If milch animals will be disease free and these diseases will be eradicated from India, then the demand for our milk products will also increase in foreign countries.”  (Agency)