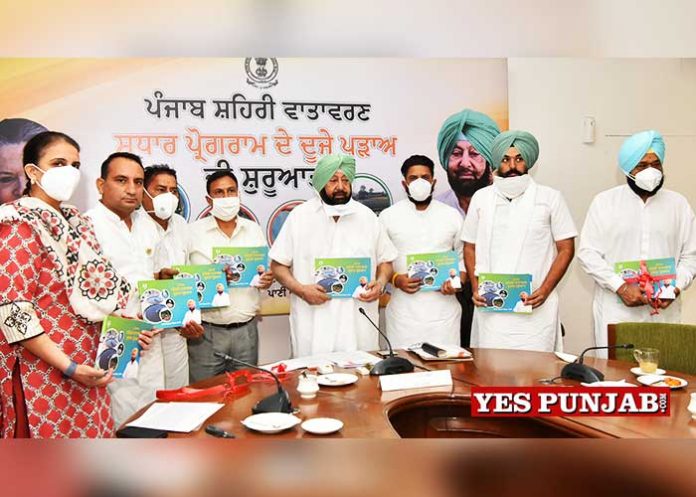 The Chief Minister, while launching projects across all the 167 urban local body towns of the state, said the Department of Excise & Taxation will soon notify the scheme, which his government had decided to initiate in view of the concern of businesses that issues related to their VAT assessments and grievances were not been redressed speedily.

Noting that cities are also centres of economic activity, with focus on trade and industry, he further said he had asked the Industries and Taxation Departments to work out a more user-friendly system to ensure that businesses, industry and traders do not have to go from one office to another.

Captain Amarinder also underlined the need to ensure cleanliness of towns, urging all cities to segregate domestic solid waste. He appreciated Nawanshahr for its consistent good performance in the Cleanliness Surveys of the Government of India.

Expressing the confidence that the UEIP schemes, of which Rs. 3000 crore worth had been completed in the first Phase, would help the state make significant improvement in the infrastructure of the cities and lives of its urban people, the Chief Minister said the programme would enable the development of state-of-art urban infrastructure and efficient service delivery systems to the urban population of Punjab, thus making urbanisation impactful.

Connected digitally to over 45000 people at 940 locations, the Chief Minister pointed out that the state government had succeeded in securing finances for these projects, amid Covid, despite the acute financial crunch.

Among the key projects, the Chief Minister cited canal-based water supply in the four big cities of Amritsar, Jalandhar, Ludhiana and Patiala, with work in Jalandhar being launched today and the foundation stone for Patiala to be laid tomorrow. The government was also close to allotting work for cleaning of Budha Nullah in Ludhiana, with the operations expected to commence in a month’s time, he added.

Noting that around 40% of Punjab’s population lives in cities, which are generally regarded as engines of growth, Captain Amarinder said the projects were in line with the various steps being taken by his government for the welfare of people residing in the cities. Among these, he listed 50% reservation of women in Urban Local Bodies, as well as the fact that all 167 towns are Open Defecation Free and 32 towns have become ODF+ and 7 towns ODF++.

Pointing out that water supply & sewerage works are already in progress, at a total cost of Rs. 4000 crore, in many towns of Punjab, he said that of 103 towns, water supply works had been completed in 49 towns and 54 towns works will be completed by next year.

For sewerage facilities, of 116 towns, works had been completed in 51 towns, and would completed next year in the remaining, while of 54 towns in which STPs had been undertaken works in 20 towns was completed, with the rest to be covered next year.

Captain Amarinder pointed out that 3 lakh LED street lights had been installed across Punjab, and e-Governance based simplified systems had been put in place to improve the working in municipal offices.

Abolition of truck unions was another major achievement of the state government, along with the enactment of the Punjab Slum Dwellers (Proprietary Rights) Act 2020 to confer proprietary rights of land upon slum dwellers, thus giving them basic civic amenities, he said, adding that the award of rights was expected to be completed within a year.

He also referred to the enactment of the Punjab Management and transfer of Municipal Properties Act, 2020, urging the Department to take quick steps to implement this law and settle all pending issues.

Cabinet Ministers Brahm Mohindra, Bharat Bhushan Ashu and Manpreet Badal, along with Punjab Youth Congress president Birnder Dhillon, termed the launch of the PEIP Phase-II as a historic programme, in line with the Chief Minister’s vision to transform the state and ensure the welfare of its people. The state government was committed to the uplift of the urban population, which had been ignored by the previous government, they said.