Home Punjab Amarinder against, Haryana, Himachal CMs in favour of MOCOCA like law to... 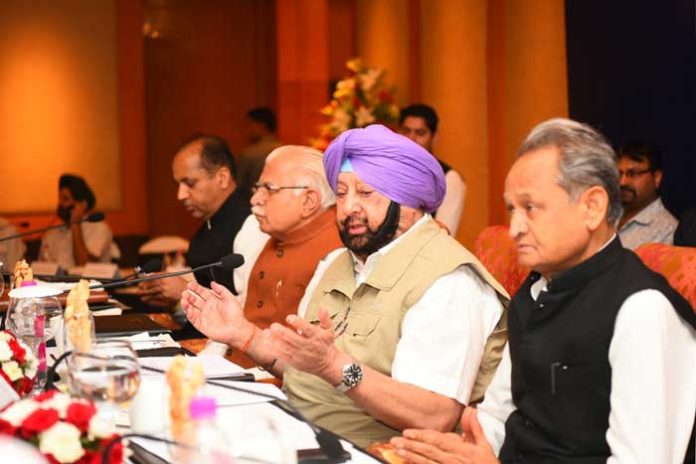 Terming drugs a national problem, the Second Joint Conference of Chief Ministers of the northern states on Thursday decided to set up a joint working group, involving officials of the Health and Social Justice Departments of all states, to share experiences and best practices in their respective campaigns against drugs.

The states expressed concern over the inflow of drugs from Pakistan, Afghanistan, Nigeria and other countries, and called for closer collaboration to battle the menace and make the region ‘Nasha Mukt’.

In a joint statement issued at the end of the conference, the Chief Ministers of Punjab, Rajasthan, Haryana, Himachal Pradesh and Uttarakhand, joined by top officials from Delhi, Jammu & Kashmir and Chandigarh, agreed on a series of powerful measures to eradicate the drugs scourge from the region. These included joint operations at the inter-state borders, information sharing and implementation of the best practices of the participating states.

There was consensus among the states on the importance of strengthening the information sharing mechanism on drugs and drug dealers/smugglers, for a more effective crackdown against them.

It was also agreed that all the states would launch major awareness programs and strive to make eradication of drugs a peoples’ movement.

The conference recognised drugs as a national problem, requiring collective efforts of all the states for its successful eradication. It proposed, therefore, to jointly press the Government of India to come out with a National Drugs Policy in order to effectively tackle the menace.

It agreed to consider opening of a Regional Training Centre for Training of Investigators for proper investigation of NDPS cases at Chandigarh. The states also agreed to take up with the Government of India a proposal to establish a Regional Drug Dependence Treatment Centre in Chandigarh Tricity area, on the lines of National Drug Dependence Treatment Centre (NDDTC) AIIMS, New Delhi.

“We believe that these efforts will go a long way in eradicating this scourge from the region, thus protecting our youth and our future generations, and ensuring a safe, secure and healthy society,” said the joint statement. The states further said they were committed to “continuing and strengthening the process of consultation and cooperation, to collaborate even more closely and actively for making the region ‘Nasha Mukt’.”

The conference, which opened with Punjab Chief Minister Captain Amarinder Singh suggesting some tough measures to tackle the problem, was attended by officials of IB, NCB and other central agencies.

Underscoring the growing threat from ISI’s narco terrorism game-plan, Captain Amarinder said the money from the drug trade was being used by Pakistan to carry on its nefarious and divisive activities in India.

ISI was trying to play on the sympathies of the Sikhs through steps like the Kartarpur Corridor while, at the same time, trying to destabilise Punjab by backing SFJ’s Referendum 2020, he said. ISI continued to back terror groups, with Pak factory-made grenades found to have been used for terror activities in Punjab, he added.

Describing the conference as a red letter-day for mutual cooperation among the state, the Chief Minister, however, called for closer examination of laws like MCOCA before implementing them in other states as they had a lot of scope for misuse. He, however, agreed on the need to further strengthen the NDPS Act.

Haryana presented an action taken report on decisions taken at the last meeting. Haryana Chief Minister ML Khattar called for a comprehensive joint programme to tackle the problem of drugs, which he described as a social rather than a political issue.

He stressed the need to cut off drugs supply to prevent youth from getting addicted, and also advocated an inter-state cell phone base of live data of absconding offenders and to keep track of dealers and their associates.

Khattar also underlined the need to strengthen investigations to prevent acquittal of offenders and suggested stringent laws and training programmes for investigators. Haryana, he said, was all set to enact HCOCA (Haryana Control of Organised Crime Act) to prevent organized crime, on the lines of POCA.

Rajasthan Chief Minister Ashok Gehlot said his state was at the receiving end of drug smuggling due to its shared border with Pakistan. Supporting Captain Amarinder’s demand for a National Drugs Policy, he called for strong steps to destroy the parallel economy being run by drug smugglers.

Himachal Pradesh Chief Minister Jairam Thakur also called for a policy/plan to further strengthen the efforts of the northern states, with a public movement to create awareness and reverse the trend. He appreciated Punjab’s Buddy Programme and said his government will try to replicate it in his state.

He also said Himachal Pradesh was considering a legislation on lines of HCOCA and MCOCA to tackle drugs. Thakur said in continuation of the decisions taken at the first conference, all the participating states will post their officers for coordination, at the common secretariat being set up for the purpose in Panchkula, by August 15.

Uttarakhand Chief Minister Trivendra Singh Rawat was of the opinion that the awareness campaign against drugs should be made a part of school education, especially in view of the growing use of women and children as couriers.

Punjab DGP Dinkar Gupta said Attari border was being used actively to smuggle drugs that go to all states, and called for proper infrastructure, with full truck body scanners and canine units, to check the same. He mooted creation of a separate central agency only for drugs, on the lines of NIA, to probe national and international links of drug smugglers, or alternatively the strengthening of the investigation wing of NCB.

It was announced that Himachal Pradesh will host the next regional conference on drugs in Shimla early next year.