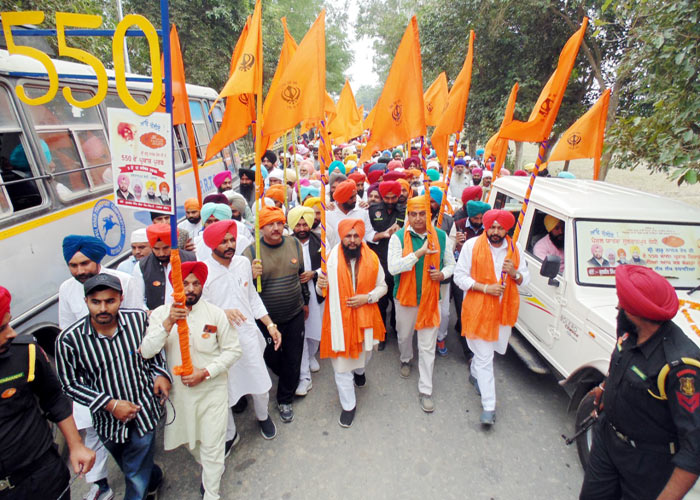 In a rare gesture to mark the 550th Parkash Purab more than 5000 devotees from Zira assembly constituency today did hiking march from Zira to the holy city to pay obeisance after covering nearly 45 KM in 6 hours . Holding kesari Nishans in hands , the sangat reaches the city with full religious flavor .

Welcoming the sangat at Lohian road near the tent city, Captain Sandeep Sandhu Political advisor to CM and MLA Navtej Singh Cheema said that it was a life time experience to receive the religious possession which walked more than 45 KM.

They said that Sri Guru Nanak Dev ji is an epitome of secularism who has followers by cutting across all barriers of society. They said that under the leadership of Chief Minister Punjab Captain Amarinder Singh, the state of Punjab is celebrating 550 years birth anniversary celebrations in a historic manner at holy city of sultanpur lodhi.

They said that it was a great opportunity for all of us to serve the humanity by following the path shown by our great Guru.

MLA from Zira assembly constituency Kulbir Singh Zira said that the it was a matter of pride for the Zira constituency to take part in the sewa at sultanpur lodhi during 550th Parkash Purab. He informed that the sangat would perform sewa at Gurdwara Shri Ber sahib in evening.

Welcoming the Grand procession Gates have been installed at various places and preparations for langers have been made at a large scale.

Prominent amongst present on the occasion included SDM Dr. Charumita and officials from civil and police departments..