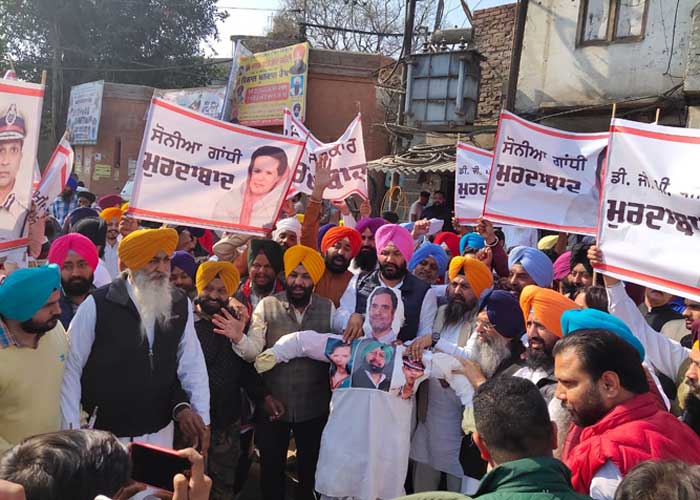 The Youth Akali Dal (YAD) today held district level protest rallies across the state against Punjab DGP for making offensive remarks against the Sikhs by painting them as ‘terrorists’, under a deep-rooted conspiracy hatched by the Congress party and the Gandhi family even as they demanded immediate dismissal of the top cop including exemplary action against him for hurting the religious sentiments of the Sikh community.

The Youth Akali workers took out processions through the markets of Muktsar, Amritsar Sahib, Ludhiana, Jalandhar, Faridkot, and other districts while raising slogans like ‘Dinkar Gupta- Murdabad’ and ‘Sonia Gandhi- Murdabad’ before holding sit-ins in front of the district administrative offices. They also burnt effigies of the DGP and Congress president and castigated them for toeing the line of former minister Indira Gandhi by trying to label Sikhs as terrorists.

Speaking to newsmen, Youth leaders Gurpartap Singh Tikka and Talbir Singh Gill said Punjab DGP should be immediately dismissed from the top post for propagating falsehood against a peace loving community which always stood for protection of the underprivileged sections of the society.

“By calling the Kartarpur Sahib visiting Sikh pilgrimages as people who can be easily lured to terrorism, Punjab DGP has proved that he was deliberately attempting to malign the image of the Sikhs, for which he seemed to have received direct orders from 10 Janpath New Delhi,’ they added.

Youth leaders also demanded a public apology from Dinakar Gupta for hurting the religious sentiments of the Sikhs worldwide. They said the DGP had committed an act of sacrilege by labeling all Sikh devotees as potential terrorists who had visited the holy place of Shri Kartarpur Sahib. “Gupta must explain that how many out of 50,000 devotees visiting the sacred place had become terrorists? they added.