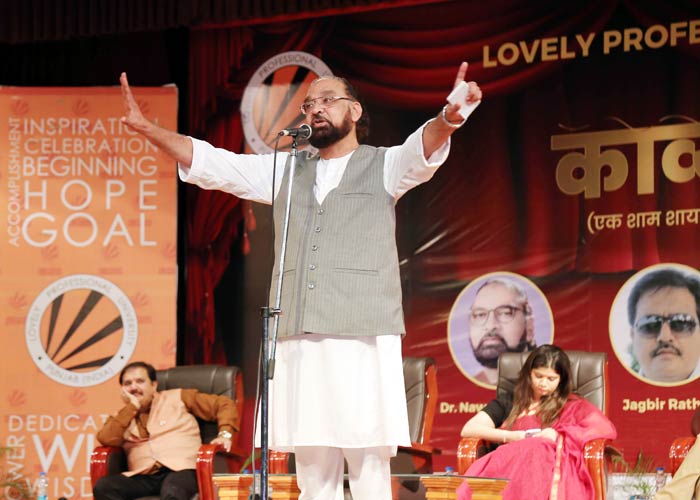 Appreciating the study environ at LPU all of the poets noun-marked it as “Taj Mahal” of education in both deeds and built up. Seeing multi-culture at the campus, they admitted poetically that fragrance of the whole of the nation blows here. They also held unanimously that the future of poems and recitations is very secure and sound at LPU which stands vivacious with national and international young generation.

Opening the poetic outpourings, Dr Padmini reflected various shades, sides and roles of women and their emotions through her profound and sensitive poetry. As an image of Indian culture, the thoughtful poetess touched the hearts of all when she orated out modern woman as victorious on all fronts.

Similarly, presenting expressive, meaningful and significant poetry in rhythms and rhymes; Dr Raathi inspired students with poetry on Shaheed Bhagat Singh, Mother Tongue, Elder ones in the family and about duties of the younger generation. His couplet “Sir cut Jaaye per desh se dagga kaammaaeye naa….Maa-Baap kaa Sir Jhukaaeye Naa” was applauded much. Prof Dr Shyam told students that the works of poets are very difficult.

Being much imaginative and suggestive, he inspired students to take education at the campus as worship; be its true worshippers; and, to go out of the campus as the best human beings. His lines “Hum Padhe Likhon ko to Insaan Hona Chahiye” and “Aaoo sbhi Id Deewali Mil Ker Manaayen” were appreciated with thundering claps.