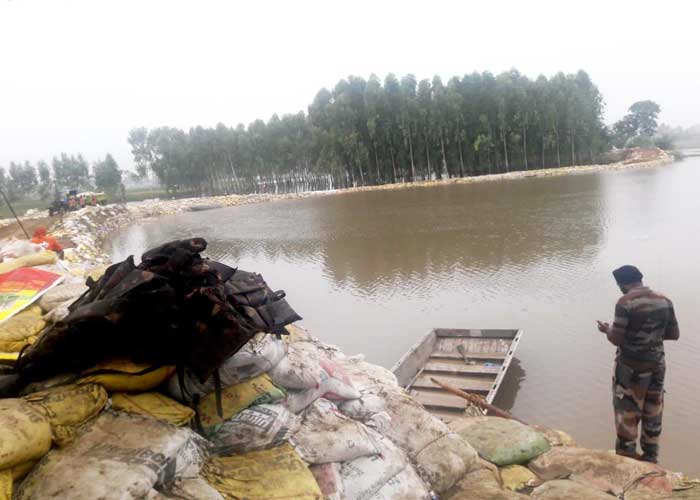 In a major breakthrough, the work of plugging the 500 feet wide breach at Jania village, which was the biggest one on river Satluj due to floods, was completed today by the Indian Army and Drainage department.

He said that technical guidance for the whole plugging operation was provided by engineers of Indian army and drainage department. Mr. Sharma said that today morning the entire work of constructing sand bag embankment and parallel stone embankment has been done to plug Jania Chahal breach.

Complementing all the people involved in one of its kind plugging operation, the Deputy Commissioner said that it was plugged under the direct supervision of the Indian Army which constructed a ring of boulders besides parallel plugging the breaches with sand bags bandh.

He said that a total of three lakh sand bags, two lakh cubic feet boulders and 270 quintals of Steel wire was pumped in to fill the breach. Mr Sharma said that in order to ensure that the work of plugging was conducted smoothly the uninterrupted supply of boulders was ensured by Punjab government from Pathankot adding that these boulders were dumped at grain market in village Kamaalpura from where they were ferried to Jania breach in tractor trolleys.

Likewise, the Deputy Commissioner said that sand bags were being filled by 2200 MGNREGA workers from 80 villages working in village Raiwala Dona and Kamalapur and Panchayats of various other villages including some from other districts also.

He said that Drainage department ensured that the work for plugging the breach was done in multiple shifts. Mr Sharma said that strenuous efforts of Indian Army, Drainage department and other social and religious organisations including sant Seechewal resulted in completion of this mammoth task today Morning.

Now further strengthening work of this bandh with earthwork has been started, which requires use of heavy earthmover machinery and was expected to be completed in coming four days.