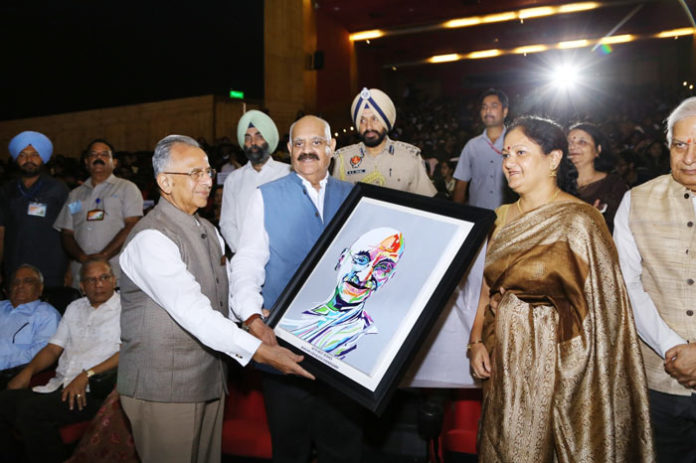 Speaking to nearly 400 children from 60 school from different states and even Dubai and Qatar participating in this three-days MUN, he advised the students to accept the responsibility to give back to society and work for a future that is bigger and broader than your own narrow self-interests without ccsinn your principles.

Governor Badnore said that youth is the harbinger of our collective future and young boys and girls must commit themselves to make learning a life-long process.

Advising the participating students, he advised them to change their attitude towards life instead of cursing the external situations in life.

Shri Saboo informed that Bhavan was the first in the city to introduce MUN concept in the region and expressed happiness that many other schools have joined in organizing it that provides a meaningful platform to the students to think, discuss and debate global issues of international peace and security.

He said that the theme of MUN this year, “Knowledge to Wisdom” is dedicated to father of the Nation Mahatma Gandhi, who was the greatest votary of peace in the world.

The inaugural had the presence of another past Rotary International President hailing from Sri Lanka, Shri K. R. Ravindran, who had flown in especially to see the conduct of MUN by Bhavan, in order to replicate the same in schools in his country.

Earlier the school choir sang Mahatma Gandhi’s bhajans, and a motivating symphony underlining the ultimate power of the truth and humanity, followed by a contemporary dance performance by the students.

A moving video depicting the turbulent times of today and the enduring resilience of the human spirit showcased some of the most inspirational moments of the world’s history, thereby urging the delegates to take responsibility and bring positive change.

The opening ceremony culminated with BVCMUN’s Secretary-General Rohit Ghangas shared his journey in organizing this prestigious event while Director General Digvijay Singh introduced members of the Executive Board to the audience, who were felicitated by the Chief Guest Governor of Punjab, Chairman Shri R.K. Saboo and Senior Principal Vineet Arora.