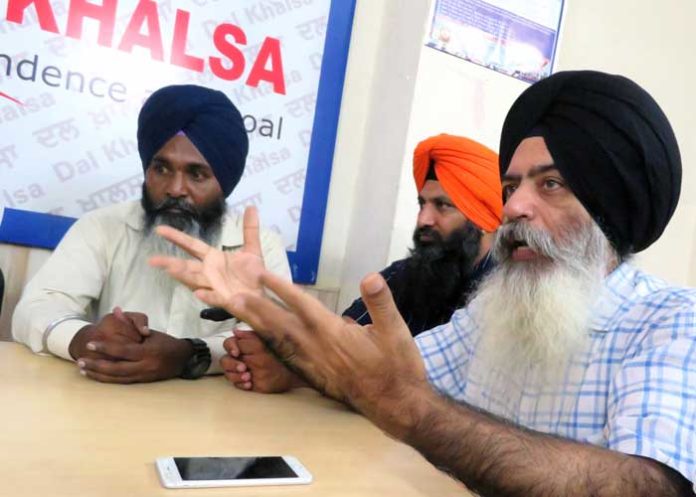 Declaring Sikhs For Justice (SFJ) as outlawed, that has hardly any official representative in Punjab and India is nothing but over reaction and frustration of the Indian government. The ban is in violation of the right to freedom of expression and hold independent belief, observes Dal Khalsa in its executive meet held at party office under the presidentship of Advocate Harpal Singh Cheema.

The meeting was held to take stock of situation in the wake of apex court’s recent order on SYL row, to discuss the possible changes in organizational structure in August and to commemorate the 550th Parkash Purab of Guru Nanak- the founder of Sikhism.

The venue and date will be finalised after consulting like-minded Panthic groups. It was also decided not to take part in the functions being held under the supervision and patronage of state and union Govt. “We won’t be part of any function that would be presided, dominated or chaired by Govt heads (read Prime Minister or Chief Minister)”.

The pro-freedom Sikh group categorically stated that Punjab doesn’t have a single drop of extra water to give to non-riparian states. “SYL is history. It’s a done issue. We won’t allow judiciary or executive to further loot of our state’s natural resources, what may come. Its clear that sooner or later, the Punjab will stop its waters being flown to Haryana, Rajasthan and Delhi illegally and forcibly.

Taking exception on Govt’s move and calling it unwarranted, Dal Khalsa office-bearers said the reasons forwarded by GoI to ban SFJ was nothing but absurd.

To drive their point home, the meeting pointed out that there are hundreds and thousands of Sikhs, residing in Punjab and elsewhere including theirs group, that stand by the goal for Punjab’s independence and Sovereignty and were struggling to achieve it through democratic and political means. We believe, referendum is non-violent mean to resolve conflicts, reads Dal Khalsa statement.

We would like to ask the Union Home ministry to reveal the names of the Sikh political parties, with whom it has consulted before proscribing the abroad based NGO as outlawed.

The decision makers of this country and their agents in Punjab Govt know that the idea mooted by SFJ to hold referendum 2020 is non-biding and its worth is not more than a opinion poll. We feel there was no provocation or urgency to ban the organization that is pleading for democratic struggle for Punjab’s independence.

Either the Govt is scared or there was more to it than meets the eyes. “We have consulted our alliance partners in abroad namely Sikh Federation UK and Sikh Youth of America and both were also of the view that the ban on US based Sikh advocacy group was continuity of India’s onslaught against organizations representing minority voices.

The meet resolved to bring constructive changes in organizational structure by giving more responsibilities to youngsters and handing over major posts to them in party’s hierarchy in the new set-up.

The decisions were released to the media by party spokesman Kanwar Pal Singh and general secretary Paramjit Singh Tanda.