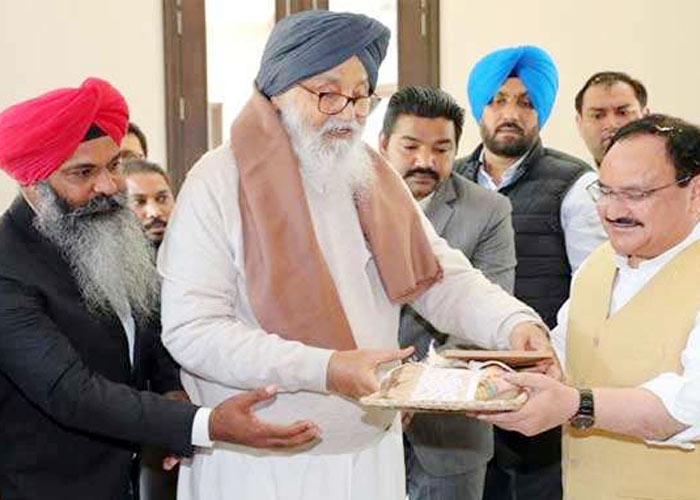 BJP President J.P. Nadda has found his son’s wedding, due on February 24, as a perfect occasion to iron out differences that seem to have cropped up in the past few months in ties with Shiromani Akali Dal (SAD) over the contentious Citizenship Amendment Act.

On Thursday, Nadda visited the Badals in Punjab and invited them for his son Girish Nadda’s wedding at Pushkar on February 24. Stressing the “personal bond” with SAD patron Parkash Singh Badal, Nadda used the opportunity to also “strategise” over strengthening the National Democratic Alliance led by the BJP.

“Whenever we meet we also discuss strategies to strengthen the NDA. Our relations with SAD and Badalji’s position in it are very important,” Nadda told reporters, attempting to clear any doubts about the apparent discomfort in the old friendship between the BJP and SAD.

The SAD had supported the BJP in Delhi elections, but stayed off the electoral fray. The rift between the two parties started over the new citizenship law. While the party supported the government in Parliament, the trouble started when some Akali leaders asserted that SAD wanted to contest 2022 Punjab assembly elections without any alliance partner.

Many believe that Shiromani Akali Dal Taksali, a SAD breakaway faction, was trying to appease the Muslim community through its posturing on CAA and was responsible for SAD’s public opposition to the legislation in pursuit to retain its Muslim vote bank. The BJP did not want to take any chances.

While the first round of reconciliation came before Delhi elections when Sukhbir Badal and Nadda publicly exchanged hugs; the second is BJP president’s son’s wedding, an occasion which Nadda has used to invite the Badals to further cement the alliance.

Nadda didn’t try to hide his attempt while speaking to media. “BJP has a very old relation with SAD… I came here to invite Badal sahab for my eldest son’s wedding. We not only share political relations but also a deep personal bond,” the BJP president said.

While Nadda junior’s wedding with Hanumangarh-based bride will be solemnised at a property in Pushkar, there will be two receptions — in Himachal Pradesh’s Bilaspur and in Delhi. Nadda is believed to have requested the Badals to attend the Delhi reception as well, which may be used as a forum to showcase the two parties are together.