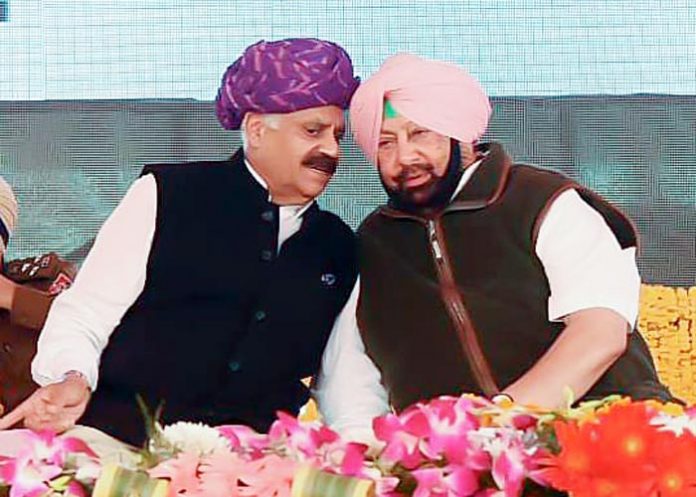 After the Punjab Assembly passed its own Bills on Tuesday to negate three central laws on agriculture, Punjab Chief Minister Amarinder Singh said he hoped Governor VP Singh Badnore “will listen to people’s voice” and give his assent, asserting his government will otherwise take legal recourse.

Amarinder Singh, flanked by 115 legislators of all parties baring two of the BJP, was talking to the media outside Punjab Raj Bhavan here after meeting the Governor and handing him copies of a resolution and Bills the Assembly passed unanimously earlier in the day.

He said that his Congress government was all set to take legal recourse if Badnore did not sign the Bills in order to save the Punjab farmers and agriculture sector.

The Chief Minister said that he had even sought time for a meeting with the President of India between November 2 and 5, and that all Punjab legislators will meet him together to seek his intervention in the state’s interest.

Amarinder Singh said that “he did not think that the Centre could afford to ignore the voice of Punjab”, adding that he hoped it would realise that “killing the minimum support price (MSP) would spell the death knell for farming”.

“Punjab’s future and national security are both at stake,” he said, adding that the coming together of all political parties in Punjab on the issue was a good thing for the state.

Expressing his gratitude for the support extended by all parties to the government resolution and the Bills in the Assembly, the Chief Minister said that the message that all of Punjab was united against the ‘black’ farm laws will go out to the farmers across the country.

During the 20-minute meeting with the Governor, the Chief Minister was accompanied by state Congress President Sunil Jakhar, Leader of Opposition and AAP legislator Harpal Singh Cheema, and Shriomani Akali Dal legislator Sharanjit Singh Dhillon, among others.

Asked about the possibility of imposition of President’s Rule in the state by the Centre to scuttle Punjab’s attempts to negate the central farm laws, Amarinder Singh quipped: “Let’s wait and see. We will move step by step.”

“However, if the situation came to such a pass, the Centre need not dismiss my government as I am carrying my resignation in my pocket and will submit it willingly rather than compromise on the interests of Punjab and its farmers,” he remarked.

Referring to the absence of two BJP MLAs from the House when the state Bills were passed, the Chief Minister said “this showed their lack of concern and love for the Punjab farmers”.

The Congress, in contrast, had already announced its unequivocal opposition to the central legislations, he added.

The Chief Minister said that his government will bring in more pro-farmer and pro-poor Bills in the House on Wednesday. The one-day special session of the Assembly, which was extended by a day, will now be a three-day affair.

He also appealed to Punjab farmers to call off their ‘rail roko’ agitation and instead protests through ‘dharnas’ which he asserted was their democratic right.

“Coal stocks have run out in Punjab and urea is in short supply, badly impacting both agriculture and industry in the state,” Amarinder Singh said.

AAP’s Cheema later said that they all were working together, rising above party lines, in the interest of Punjab farmers who were a priority for the state.  (Agency)