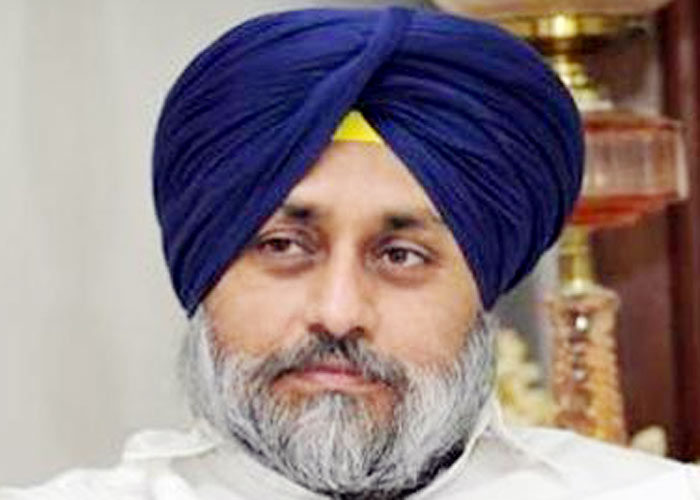 The Shiromani Akali Dal president Sardar Sukhbir Singh Badal said here today that when the SAD forms a government in the state, ” we will totally reject and block the implementation Modi’s anti-farmer Acts in Punjab, declare the entire state a Principal Market Area and repeal the hostile APMC 2017 enacted by Amarinder.”

Addressing a packed press conference at the party headquarters here this afternoon, Mr Badal also said that it was the duty of the government to ensure that the farmers produce is procured at Minimum Support Price for all the 22 crops for which the center annually declares MSP.

“We have been demanding that the assured marketing at MSP regime must not only continue but must also be expanded to cover all the 22 listed crops. When SAD forms a government in the state, we will ensure that this demand is converted into an achievement. We will do anything for the farmers because they are the backbone of Punjab’s economy. There is no Punjab minus the farmers,” he said.

The SAD president blasted the Chief Minister for telling brazen lies about farmers in broad daylight, and that too on the sacred floor of the Punjab Vidhan Sabha. He claimed that he had already discussed everything about the issue with the farmers’ organisations before bringing those bills to the House.

But the organizations later dismissed these Bills as “ a “tutte futte” ( broken and meaningless) Are te farmers’ organization happy about these bills? Amarinder should respond to the derogatory and dismissive description of his Bills by these organsiations. He also must explain to the House why he lied about his talks with the farmers bodies about the Bills, ” said Mr Badal.

Mr Badal said that Members of the Opposition were shocked to see how the Chief Minister had played a fraud on Punjab by betraying the unanimous Resolution passed by the Vidhan Sabha. “This Resolution had outrightly rejected centre’s anti-farmer Acts and committed the state government to declaring Punjab a Principal Market Area.

It had also rejected the APMC of 2017 which is a photocopy of Modi’s anti-farmer Acts. But bills wichwere subsequently brought by the Amarinder Government carried none of these provisions. Amarinder is guilty of misleading and betraying the trust of the House,” said Mr Badal The former Deputy Chief minister alleged “a deep rooted and devious conspiracy between the BJP and Captain Amarinder Singh against the farmers.

”What happened in Chandigarh yesterday was a part of a joint and evil Amarinder-BJP game-plan which is a part of a a clever strategy to divert the farmers movement away from its nerve-center, Punjab. They want to weaken the intensity of this movement by uprooting it from its base in the country’s most agrarian state.

It suits both Amarinder and Modi that the agitation is shifted away from where the farmers are the strongest , and that the Punjab farmers are forced to fight away from their home ground.

This is really dark and devious part of a wider conspiracy against the farmers ” said Mr Badal adding that “all these tricks are BJP’s conspiracy to tire the protesting farmers out, and Amarinder has fully facilitated Modi’s strategy against the beleaguered farmers.”

Answering a question, Mr Badal said that the Captain-BJP team yesterday misused the sacred precincts of the Punjab Vidhan Sabha to implement the center’s anti-farmer plans. “It is shocking and painful that Punjab’s Temple of Democracy was misused yesterday to endorse all the anti-farmer Acts of the Modi government.”

Referring to the Chief Minister’s references to his willingness to resign if the center did not agree to the farmers’ demands, mr Badal quipped, “ Those who were sincere about resigining tofigt for the farmers have already resigned while Captain Sahib is still merely
boasting. The Akali minister in the Union cabinet resigned and she does not even boast about it. That was just duty fulfilled”