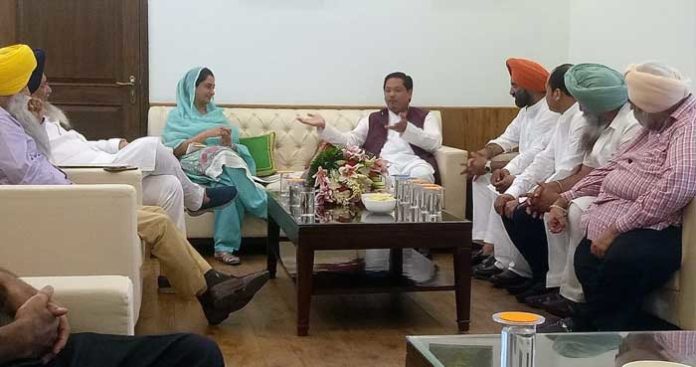 The delegation, which met the Meghalaya chief minister here, was also assured that the government would come out with an amicable solution to the crisis being faced by the Sikh community in Shillong after locals and recently even the radical HNLC group threatened them with their lives in case they do not vacate the area in which they have been living for the last two hundred years.

During a detailed discussion with union minister Harsimrat Badal, the Meghalaya chief minister said he had established a committee headed by the Deputy CM which would look into claims and counter claims of both the Sikhs as well as local Khasis and come out with an amicable solution which would be acceptable to both parties. CM Congrad Sangma said in the meantime he had issued strict directions to ensure the safety and security of Sikhs living in Punjabi Lane.

Briefing the chief minister, Mrs Badal said an attempt was being made to relocate the inhabitants of Punjabi Lane forcibly despite a court order staying the proposed relocation. Stating the Sikhs of Punjabi Lane had been brought to Shillong around 200 years ago by the British.

Mrs Badal said they were given land in the area by the Shillong municipal board in 1954 after the Syiem of Mylliem, the traditional Khasi unit called Hima, agreed to the same. She said following this four additional land ‘pattas’ were given to construct a gurdwara and two temples.

Briefing the Meghalaya chief minister SGPC president Gobind Singh Longowal and DSGMC president Manjinder Singh Sirsa said Sikhs were living in a state of fear in Meghalaya after the hardline organization HNLC issued threats to residents of Punjabi Lane to vacate the area or face violence.

Shillong Sikh Harijan Colony President Gurjeet Singh, who was also present on the occasion, said Sikhs were bonafide residents of the area and had necessary documents to prove this. He said despite this some Sikh families had been issued eviction notices. Gurjeet Singh also disclosed that the local authorities were biased towards the claim of the Sikh community and had even filed a review petition when a lower court upheld their claim.

The Meghalya chief minister assured the Sikh delegation that he would get the issue examined thoroughly and assured that there would not be any discrimination against the community members in Meghalaya.