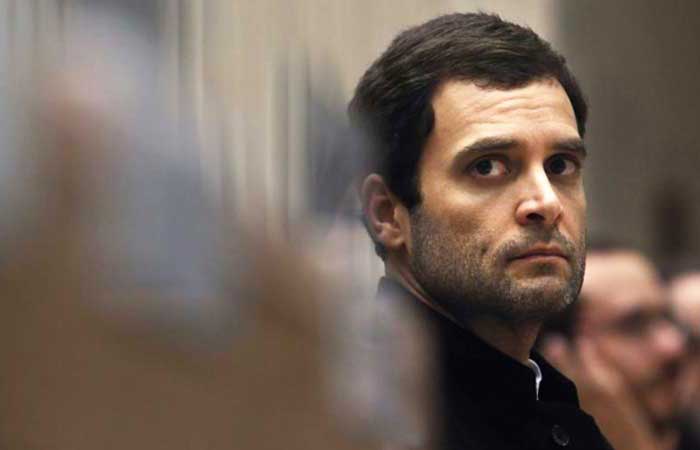 New Delhi, Jan 6, 2021 –
Rahul Gandhi is only a Congress MP and does not hold any party post as he had already stepped down as its President after the 2019 Lok Sabha debacle – the second in a row for his party. But whenever he goes out of the country on a personal trip, he ends up being trolled by the opposition while questions are raised by his critics in the party — though they do not express these publicly.

Ahead of the party’s Foundation Day in December, Gandhi went abroad on a personal visit and it was party General Secretary and spokesman Randeep Singh Surjewala who announced that he was not in the country.

“Rahul Gandhi is on a short personal visit to see his ailing grandmother. He is not on a holiday,” he said, adding that as a party worker, Gandhi performs all the duties assigned to him.

Slamming the BJP over its criticism, Surjewala said the BJP should not comment on someone’s personal visits.

Senior party leader and Leader of Opposition in Rajya Sabha Ghulam Nabi Azad said that for 136 years “we have been celebrating the foundation day of the Congress, regardless of someone being present or absent”.

But Rahul Gandhi is scarcely an ordinary party MP. Sacked Congress spokesperson Sanjay Jha notes that he “must recognise that in politics there is no margin for error. You have to be very aware that questions will be asked of you”.

The Congress is, however, always vocal in Gandhi’s defence. General Secretary, Organisation, K. C. Venugopal slammed the BJP for questioning his trips abroad, saying that “everyone has the right to undertake personal visits”.

He said that the BJP is indulging in petty politics and they are targeting Rahul Gandhi because they want to target only one leader.

But the probable reason why the former Congres President is in the firing line whenever he goes abroad is the party’s electoral defeats and that while Gandhi, though serious in taking on Prime Minister Narendra Modi, lacks consistency.

This was the opinion of NCP supremo Sharad Pawar after the Bihar Assembly polls where the Congress’ poor performance prevented from the RJD-led Mahagathbandhan from getting the numbers to form the government.

However, his remark had left the Congress upset and the NCP had to clarify that it was “friendly advice”.

However, the RJD had also cited Gandhi’s holiday during the election campaigning as a factor for the loss.

The Congress, ever since losing power in 2014, is on the path of decline except in 2018 when it won the Assembly polls in three states — Madhya Pradesh, Rajasthan and Chhattisgarh — though its government in Madhya Pradesh proved to be short-lived.

Gandhi even could not stop his close friend Jyotiraditya Scindia from leaving the party and thus, dooming the government. Apart from Scindia, Sachin Pilot, another young leader and Deputy Chief Minister in Rajasthan too rebelled, but was timely intervened by veteran leader Ahmed Patel helped nip the rebellion and save the government.

The party also lost Karnataka, where it was in alliance with the JD-S, after both parties saw a number of their legislators rebel and join the BJP, which returned to power.

While the party is in power in Punjab and Puducherry, part of the ruling dispensation in Maharashtra and Jharkhand, and the main opposition party in Assam, Gujarat, Karnataka, Uttrakhand, Himachal Pradesh, Goa and Kerala, the political space left by Congress in other states is either being taken over by regional parties or the BJP is gaining a foothold in West Bengal, Odisha, Telangana and Jammu and Kashmir.

Congress insiders say that the BJP is a round-the clock election machine and Congress can’t sit and watch as elections in West Bengal and Assam are a few months away but Modi and Home Minister Amit Shah and Modi have already set their campaign rolling ahead.

The string of electoral defeats compelled 23 senior Congress leaders to write a letter to party’s interim chief Sonia Gandhi demanding reforms amid efforts to bring back Rahul Gandhi to the party helm, but as Sanjay Jha notes, Brand Rahul Gandhi has been destroyed by BJP systematically with a strategy.

Another party leader agreed. “Now Rahul Gandhi has to walk the extra mile to reclaim his brand and also lead the party to victory in elections to boost the morale of the party but also have to be more communicative and accessible to achieve this target,” said the leader who did not want to be named.

The Congress looks at the Gandhis in every crisis – in 1998, it brought Sonia Gandhi to the head the party and though she failed to dislodge then Prime Minister Atal Bihari Vajpayee in 1999 but succeeded on her second attempt in 2004. Rahul Gandhi has failed in two successive elections — though he was not the party chief in 2014. (Agency)