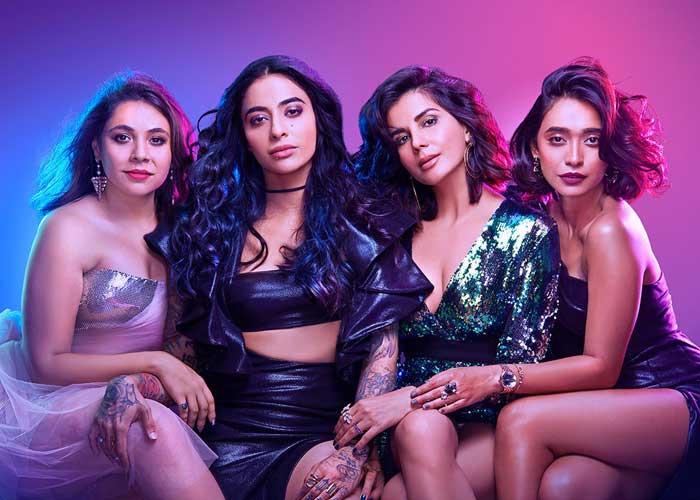 Rangita Pritish Nandy was always certain that she wanted to celebrate women, their flaws, their highs and lows through her show “Four More Shots Please!”, but without male-bashing.

“We were clear from the top, our women propel themselves. Their flaws, highs, crashes, celebrations are theirs. They are not a consequence of the men in their lives and therefore they will not pin either what’s wrong or for that matter what’s right in their lives on the men they share their lives with,” Rangita told.

“That is the only way this show is about them, their stories, their lives. And that is what sets us apart from every other show/movie made in the Indian content space about women. There is zero male-bashing. The men are lovely, there are times that as an audience you want to yell at my girls because they’re letting down the men in their lives. Sometimes you even love the men more than my girls do. It’s one of the things we pride ourselves on; there is no black or white. The world we live in is many shades of grey,” she added.

Through the prism of “Four More Shots Please!”, Rangita tells the story of four unapologetically flawed women as they discover life while balancing their friendship in Mumbai. They are not ashamed about their sexual desires, unabashed about their sexuality or how they lead their lives. They screw up, but own up to their mistakes. They are successful, but yet face failure in some aspects of their life.

Many assumed it will be a reminder to American drama “Sex and The City” — a presumption which was short-lived as the show narrates a much more complex tale imbued with subtle sexism present in Indian society along with wit.

“When you tell a story about young women living and loving their way through life in Mumbai, can sexism ever be ignored? Prejudice is a reality, has been forever. The challenge is to make it tonally audible. It is important that women watch our show and it is also important that men watch, enjoy and have our backs on it,” Rangita said.

Opening up about the success of the show, she said: “The success amongst women we had anticipated to an extet… not this massive avalanche of love! What also surprised us was the love we received from male audiences, though not all of them will come out and say they watch the show-it’s their guilty pleasure. But the numbers tell us clearly that this is a show that both, women and men have not only loved but anticipation for season 2 is high!”

According to Rangita, the second season is “all about peeling back the layers we had written in season one and digging deep to find new fears, new conquests, new highs, new pitfalls for the girls”.

Talking about the challenges while making the second season, Rangita said: “The writing got challenging, for sure. We now had characters that an audience had made their own, the world around women, the conversations around women, women themselves continue to undergo a sea-change as we speak.”

“To write a show about women that doesn’t disrespect everything that’s happening in the world in context to women and yet remains entertaining, relatable and tonally audible for all sexes… that’s a tremendous challenge. Hitting a shrilly pitch where no man — even other women — wants to listen to what we have to say defeats the purpose of our show. And ofcourse: dates! The show was successful, that led to many of our talent and HODs picking up lots of new work, leaving limited time for us. It was the juggle of the century and from every estimation, this is going to only get tougher as we progress, hopefully, to subsequent seasons,” added Rangita, who has previously backed projects like “Chameli”, “Shaadi Ke Side Effects” and “Mastizaade”.

Next, she wants to tell a love story.

“I love a good human connect story. And then there’s love. Different for everybody and yet at the core of it all, the one emotion the world pivots to. I’d love to work on a love story for our times when everything we know about love has changed, one could even say mutated,” she said.  (Agency)