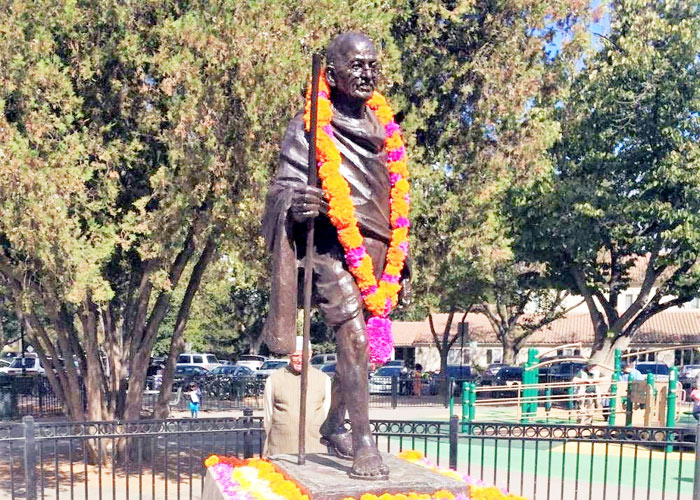 Mahatma Gandhi has been caught up in the anti-racism movement’s campaign for removing statues and memorials and the White House has decried the targeting of the Father of India.

“Radical left-wing mobs seek to tear down our monuments and our memorials – everyone from George Washington to Abraham Lincoln to Frederick Douglass, and even Gandhi,” she said.

What began as an outgrowth of the national protests against police brutality targeting symbols of the Confederate states that unsuccessfully seceded from the US in the 19th century to preserve slavery, has now spawned a Talibanesque statue destruction force defacing memorials to the Father of the Nation George Washington and Mahatma Gandhi and mindlessly destroying statues of even those who campaigned against slavery and racism.

With the makings of a culture war pitting the left and the progressives against the mainstream, Trump has plunged into the controversy opposing the taking down of monuments to even the leaders of the slavery-upholding Confederacy.

Lagging in the polls to former Vice President Joe Biden, who is to be the Democratic Party candidate in the November election, Trump is counting on the excesses of the anti-racism movement turning off centrists.

In speeches commemorating the Independence Day last week his attacks centered on those wanting some statues and memorials removed.

Against the backdrop of the gigantic busts of Washington, Abraham Lincoln, Thomas Jefferson and Teddy Roosevelt on Mount Rushmore, Trump said on Friday, “Our nation is witnessing a merciless campaign to wipe out our history, defame our heroes, erase our values and indoctrinate our children.”

The Democratic leadership has been ambivalent on the issue for fearing the vocal leftist base.

During a CNN programme, Senator Tammy Duckworth, considered a front-runner to be Biden’s vice-presidential candidate, would not take a stand on demands for removing Washington’s statues, saying, “We should listen to the argument there (for removal).”

While Gandhi statues in Washington and in the California city of Davis were vandalised with personal insults against Gandhi last month during theAprotests against police brutality, there is a campaign to remove his statues.

Riding on the coat-tails of the anti-racism protests sweeping the country, a petition backed by the Sikh youth organisation, Jakara Movement, with 5,000 signatures demanded the removal of Gandhi’s statue in the Peace Garden at the Fresno State University in California, according to the Fresno Bee newspaper.

A section of Sikhs and others, including African Americans,Ahave had held a demonstration near the vandalised statue of Gandhi in Davies asking for it to be removed, according to the Davis Vanguard.

Dillan Horton, an African American running for City Council, was quoted by the publication as calling Gandhi “an anti-black segregationist.”

The Indian Association of Sacramento has, meanwhile, launched a petition on Change.org asking Davis to retain the statue and also protect it from vandals.

The petition signed by 3,428 people as of Monday night pointed out that Martin Luther King, the African American icon of the US civil rights movement had said that the Gandhian philosophy was “the only morally and practically sound method open to oppressed people in their struggle for freedom” and South Africa’s anti-apartheid leader Nelson Mandela had acknowledged being inspired by his non-violent method to fight his coutry’s racist regime.

The anti-racism movement behind the campaign against some memorials came out of the protests against the extra-judicial killing of an unarmed African American man by police in Minneapolis.

A memorial to Washington, who led the War of Independence against Britain, which then upheld slavery and slave trade, was defaced in New York and Philadelphia, and demands have been made to remove his statues.

Statues of the nation’s founding fathers Thomas Jefferson and Benjamin Franklin, and Tomb of the Unknown Soldier of the American Revolutionary War against Britain were also vandalised in Philadelphia.

An explanation for the targeting of the nation’s founders is that they had owned slaves, although Franklin had later campaigned against slavery.

A statue of Christopher Columbus, the Italian who led Europeans to the Americas in the modern era, was destroyed in Baltimore.

The mindless rage has taken down even the statues of Matthias Baldwin, a White campaigner against slavery, Frederick Douglass, an escaped slave himself who fought slavery, and Ulysses Grant, a former president who as a general during the Civil War put down the secessionist slave-owning states.

There are also calls to remove a statue of Abraham Lincoln, who enforced the abolition of slavery and fought the secessionist slave states of the South, because it showed a freed slave kneeling by him in gratitude.

The move against Confederate symbols has succeeded in some places.

State and local governments across the American South have removed statues of Jefferson Davis, the president of the breakaway Confederate states, and several leaders and soldiers of the slavery supporting secessionists and the legislature and Governor Tate Reeves of Mississippi approved the removal of the state flag that had the inset of the Confederate banner.  (Agency)