Home National When the calm was shattered in Tughlaqabad 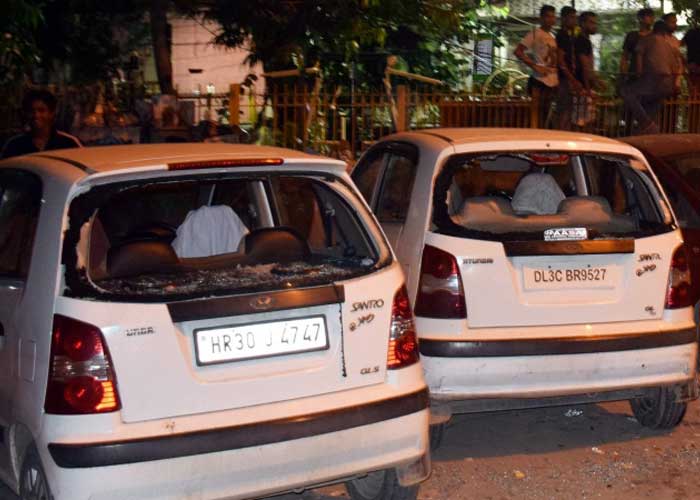 “I was having dinner in my house when I heard loud noise coming from outside. As I looked out of my window, I saw a mob with sticks going on a rampage smashing cars parked on the street. They even pelted stones on the policemen and set a few police bikes on fire. I have been living in this area for the past seven years but have never witnessed something of this sort,” said Vineet Khurana, a resident of Tughlaqabad Extension area in south Delhi.

Vineet has still not got over the incident even a week after he saw pitched battle between protestors, who were angry at the demolition of Sant Ravidas temple in the area, and police. The situation has been calm ever since, but tension still prevails.

Thousands of protesters turned violent on the night of August 21 when the police did not allow them to proceed to the site of the temple demolished by the Delhi Development Authority (DDA) on August 10 on the orders of the Supreme Court.

Police have arrested 96 people, including Bhim Army chief Chandrashekhar, in connection with the case.

Many people in the area didn’t send their kids to school or outside to play looking at the situation last week. However, everything is normal and life is back at the normal pace.

The shopkeepers who had shut their shops on the next day of the incident said that initially heavy security was deployed and the market association had a meeting with the police who have assured that no unlawful activity will place.

“We trust the police and have opened our shops while nothing has happened after that night. There was a little fear after seeing the August 21 night’s incident but we are working our way back,” said Rahul Gupta, a shopkeeper in the area.

A wall was constructed at the site with a signboard which reads: “According to the Supreme Court, this land belongs to Delhi Development Authority. Any illegal construction or possession of land is a punishable offence.”

According to DCP (southeast) Chinmoy Biswal, “We observed utmost restraint, but the mob turned violent and started pelting stones and damaged public property. We have to put in reasonable force to disperse the unruly mob from the area inorder to restore law and order. In the process, 96 rioters were apprehended from the area. The accused were produced in front of the magistrate and have been sent to Judicial custody for 14 days,”

Biswal also added that force has been deployed for the safety of the residents and also check that any unlawful activity doesn’t take place in the area.

Ashok Bharti, the convenor of Akhil Bhartiya Sant Shiromani Guru Ravidas Mandir Sanyukt Sanrakshan Samiti, said that the Dalit body had given a call for a peaceful protest at Ramlila Maidan, but some people decided to proceed to the disputed site. While they now demand the release of the alleged innocent people who have been put behind bars.

“To maintain law and order situation in the area police had already deployed heavy force in the area but the agitators broke the barricades. When the police dissuaded the protesters, they dispersed but gathered again in small numbers near Nizamuddin,” said a Biswal.

“Police had set up barricades near Ashram Chowk and then at Maa Anand Mayi Marg to stop them from reaching the site of the demolished Ravi Das temple. However, they mixed among the locals to avoid being stopped by the police,” he said.

Around 6 p.m, a sprawling crowd of more than 4,000-5000 protesters broke one layer of barricades after another when police tried to stop them from getting close to the temple that was demolished 10 days ago.

The protesters approached the site which had been cordoned off by the Delhi Police. However, several police officials were also asked to call in their teams and more than 600 policemen covered the area in the next one hour. A four-layer barricade was set up by the police, two of which were broken by the protesters.

The protesters started pelting stones at the police teams as soon as police tried to stop them. Around 7 p.m., police started using tear gas shells but the stone-pelting continued.

The protesters smashed windshields and window panes of more than 20 cars parked along the road. Seeing the agitated crowd, the locals started to run haywire to save their lives. A few residents even opened the gates of their houses for the locals.

“Around six government vehicles were set on fire by the mob. Several other vehicles on roads and residential areas were also damaged by the mob,” said Biswal. The protesters were forced to retreat after 29 rounds of tear gas shelling.

Tension prevailed in the Tughlakabad area in south Delhi after a protest by Dalits against the demolition of a Ravidas temple turned violent on Wednesday, prompting police to resort to “mild lathicharge” and use tear gas to disperse the crowd.

According to the police, the protesters set fire to two motorcycles and vandalised a police vehicle, causing injuries to a few policemen.  (Agency)