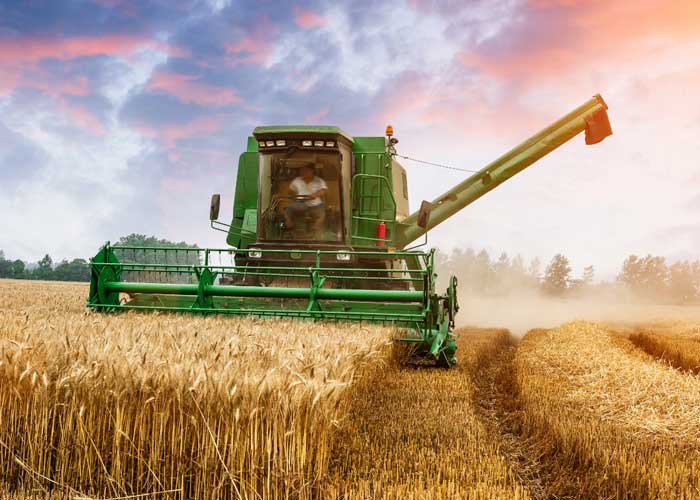 Wheat harvesting is in full swing in the major producing states of Punjab and Haryana in the ongoing rabi season while it is close to finish elsewhere. Wheat is the major rabi crop in India and the country is to harvest a record crop of over 106.21 million tonnes in the crop season 2019-20 (July-June), according to the second advance estimates.

As reported by the States about 98-99 per cent of wheat crop has been harvested in in Madhya Pradesh, 90-92 per cent in Rajasthan, 82-85 per cent in Uttar Pradesh, 50-55 per cent in Haryana, 45-50 per cent in Punjab and 86-88 per cent in other States, said Union Agriculture Ministry in an official statement on Friday.

The Department of Agriculture, Cooperation and Farmers’ Welfare, Government of India is taking several measures to facilitate the farmers and farming activities at field level during the lockdown period, said the statement.

Due to the complete lockdown, all the wholesale mandis were closed on March 25. There are 2,587 Principal/Main agricultural Markets available in India, out of which 1,091 markets were functional on March 26 while 2,067 markets were made functional as on April 23.

Sowing of summer crops is going on uninterrupted despite a nationwide lockdown as 34.73 lakh ha area is under summer rice as compared to 25.22 lakh ha, during the corresponding period of last year.

Similarly, about 5.07 lakh ha area coverage under pulses as compared to 3.82 lakh, ha during the corresponding period of last year.

Area of course cereals reached to 8.55 lakh ha as compared to 5.47 lakh ha, during the corresponding period of last year.

Area under oilseeds is around 8.73 lakh ha as compared to 6.80 lakh ha, during the corresponding period of last year.  (Agency)