Home National Were Delhi Riots triggered by mystery Sunday fight at an eatery? 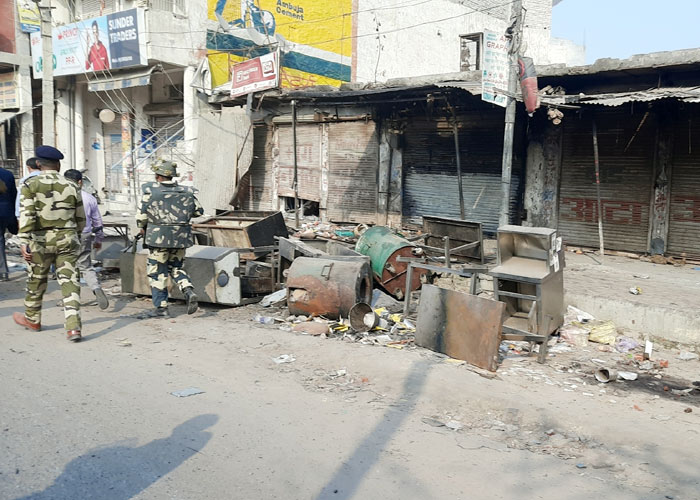 It was a usual Sunday evening as people in Karawal Nagar area were roaming on the streets, shopping and meeting friends. But suddenly a fight at a small restaurant in a market that evening snowballed into large-scale violence and arson in several areas of northeast Delhi.

People are still clueless about what led to the fight at the restaurant that suddenly took the shape of the deadliest clashes in Delhi in decades, after the 1992 countrywide riots and 1984 anti-Sikh riots.

According to locals, the fight started at the Sanjar Chicken Corner in Karawal Nagar area around 8.30 p.m. on Sunday. “Following the fight at the restaurant, the owner called his family for support who then pelted stones on the people around there,” Praveen Singh, a resident of Karawal Nagar told IANS.

On whether the police was called in, he said, the people from the locality continuously called up the police but to no avail. The violence erupted here on Monday and Tuesday. The building was occupied by the angry mob.

Prabhat Kumar another resident from the area told IANS, “When I heard the loud sound in the night, I came out of my house and saw the people pelting stones. When I enquired then I came to know that the restaurant owner had thrown boiling oil on the people after some heated debate.”

Questioned on what was the argument about, he said, “I have no idea what they were discussing, that suddenly changed to such fight here.” Kumar further said that following the fight that night, the police restored peace late night.

“But on Monday afternoon everything changed as the angry mob set a number of houses, shops on fire,” he said, pointing towards the gutted shops and homes in the adjoining lanes of the main road. On the main road of Karawal Nagar, several shops and showrooms were gutted.

A motorcycle showroom bore the brunt as over 30 to 35 new motorcycles were gutted, while several other electronic shops, departmental store were looted and torched. Till now, the death toll in the deadly violence has climbed to 36 with over 200 people still injured and admitted in hospital.

Another resident of Karawal Nagar, Ashwini Ram told IANS that the people from different communities have been living together in the locality for decades peacefully. “But this has happened for the first time that the people torched the houses of others,” he said.

Ram further said that when the houses of three to four Muslims in the nearby lanes were torched, we went and anyhow pulled some of the residents who were still trapped inside their house. Narrating the hours of trauma, Mohammad Iliyas wiping his tears said, “I have come on streets, my home and my everything has been destroyed. If the locals did not come to our rescue, then our homes would have become our graves.”

Iliyas’ three-storey building received the maximum damage on Monday when the angry mob locked the doors of his house from outside and threw petrol bombs at the house and also on the cars parked outside his house. “We were locked from outside, we were feeling suffocated in the home due to the smoke. But by then the locals and the police came to our rescue and they brought us out,” he said.

Iliyas’ neighbour, Mohammad Ahmed, whose house was also torched in the Karawal Nagar area said that it was the timely intervention from the locals that saved out lives. “Some locals after seeing the smoke came through the rooftop with the water pipes in their hand to douse the flame. While they were dousing the flames, the gas cylinder in the house of Iliyas exploded and the balcony of the top floor collapsed,” he said.

“Then some other locals and policemen opened the doors of our homes and brought us out and took us to a safer place,” he said. Shrikant, another resident of the area said that the social fabric has been destroyed now. “I didn’t see any local participating in the arson. It seemed that the people involved in the attack were outsiders as they had their faces hidden and they were even wearing helmets to hide their identity,” he said.

The clashes first broke out on Sunday between demonstrators in favour of the controversial new citizenship law and those against it. In the three days of clashes since then, hundreds of vehicles, shops and homes were gutted in the violence. The people have questioned the role of the Delhi Police over its inaction during the violence.  (Agency)