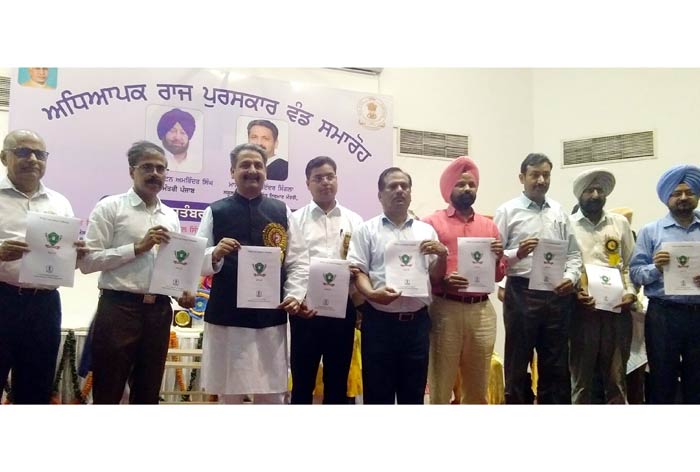 Providing further thrust to its agenda to ensure quality and value-based education for all, Punjab Education Minister Vijay Inder Singla on Thursday unveiled the Smart Schools Policy 2019-20 terming it as a major step which would augment the existing infrastructure thereby revolutionising the education sector in state.

Speaking on the occasion, the Minister while underlining the government endeavour in sprucing up the existing facilities in state schools also exhorted the community leaders or representatives to come forward in complement the state efforts.

“I have already written to all MLAs requesting them to attract the attention of all those willing to contribute towards this noble cause,” Singla added.

Referring to the Clause 7 of the policy, Singla said anybody could contribute for the improvement of infrastructure in the school as per its requirement and with the approval of the School Management Committee.

Such block or building within the school premises where the donne wants to contribute can be named after the donee or any of his relative provided such a person in whose name the block is named has/had good moral character and attained good reputation in the society.

Such a proposal would be forwarded by the school on the portal and after obtaining the necessary confirmation regarding the donor or the person on whose name the building is to be named. Approval shall be granted online by the competent authority, Singla added.

Availability of classrooms, playground, educational parks, science labs, toilets etc. impact the quality of education, he said adding that various studies reveal that the performance of students in such schools is better than those who study in schools with poor and insufficient infrastructure.

He said that a smart school, in the policy, is distinguished from any ordinary school. Smart school is a technology based teaching learning institution, which prepares children for the information and knowledge based society apart from making their holistic development. Each Smart school would have a separate classroom for every section of class as per Pupil Teacher Ratio, Spacious, airy and well ventilated classroom; Green board/white board.

Furniture for all students; besides Separate adequate number of functional toilets for girls and boys; Free sanitary napkins to girls; Well equipped Principal/Head Master room including staffroom would be provided to the smart schools. Well equipped science laboratories, vocational laboratories, ICT laboratories, etc. amongst other facilities.

Pertinently, in order to strengthen school education and improve learning levels of students through ICT based education in Government schools, the Department of School Education Punjab had been converting government schools into Smart Schools.

Senior officers of school education department were also present on this occasion.