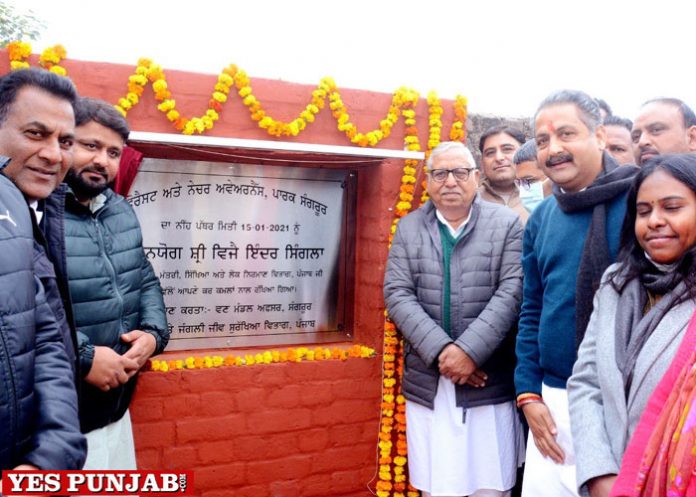 Sangrur, January 15, 2021 (Yes Punjab News)
School education and PWD minister Mr. Vijay Inder Singla, on Friday, laid the foundation stone for the construction of ‘Forest and Nature Awareness Park’ here at Partap Nagar. While elaborating details, cabinet minister Mr. Singla said that the park will be developed on the 1 acre land of Zila Parishad by the forest department.

He added that the park will be developed as a symbolism of Biodiversity Conservation which in addition also includes walking trail, open gym, childrens’ corner.

Mr. Vijay Inder Singla said that forest department will spend around 1 crore rupees on the development of the park as it is being developed with an aim of public awareness creation on Healthy life and preservation of Forest for healthy environment.

He added that after developing the park, the forest department will hand over it to Zila Parshid for operation and maintenance. He said that apart from plantation of trees of medicinal and native species, several species of herbs, shrubs and ornamental plants will also be planted here.

The cabinet minister said that for the beautification and overall development of Sangrur city, several works has been initiated during his term. He said that apart from development of parks, the road connecting BSNL park to Bus stand is also being widened and adequate funds has also been sanctioned to provide required facilities at sports stadium.

He added that their government is also committed to connect each and every household of the city to potable water and sewerage pipelines.