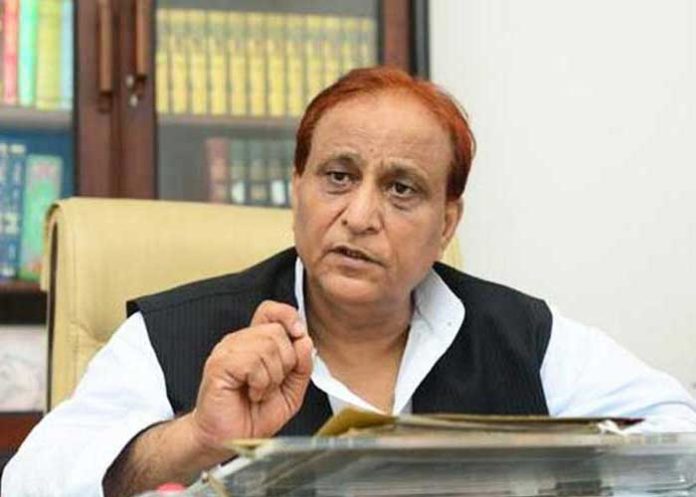 Slapped with over two dozen cases, Samajwadi Party (SP) stalwart and MP, Azam Khan seems to be facing the most difficult time of his political career. Criminal cases have been registered against him in the recent past but his woes have not ended with that.

The district administration of Rampur, the native town of the SP leader, is now contemplating listing Azam Khan as land mafia on the state government’s “Anti-Bhoo Mafia”(anti-land mafia) portal. The portal was established by Chief Minister Yogi Adityanath, to identify land mafia and register complaints of people relating to land grabbing, soon after assuming power in Uttar Pradesh in 2017.

According to the police, the newly-elected member of Lok Sabha, Azam Khan faces more than 30 cases in which majority of cases relate to grabbing of either government land or land belonging to poor farmers. The Superintendent of Police, Rampur, Ajay Pal Sharma said that keeping in mind the long history of his involvement in land grabbing cases, Azam Khan’s name would be recommended to be listed on the land mafia portal.

“The District Magistrate and myself would be reviewing reports (FIRs/cases) of various police stations in the district which relate to land grabbed by Azam Khan or his aides. Subsequently, his name would be recommended to be listed on the land mafia portal of the government,” Ajay Pal Sharma, an IPS officer of the Uttar Pradesh Police told.

Earlier on Friday, a case was registered against Azam Khan on the basis of an FIR filed by the Revenue Department at Azim Nagar Police Station in Rampur. The FIR reveals that Azam Khan and his close aide, a former police officer called Aalehasan Khan, allegedly ‘grabbed land’ from 26 farmers and utilised it in the construction of Mohammed Ali Jauhar University, a mega multi-crore project of the SP leader. Subsequent to the FIR of the Revenue Department, 26 farmers of Rampur, who were allegedly tortured to sign a forged sale deed, would now file separate FIRs.

The complaint of the State Revenue Department also says that Azam Khan, who misused his position (as Cabinet Minister of Uttar Pradesh, 2012-2017) in grabbing land of poor farmers, also illegally occupied another huge chunk of land measuring 5,000 hectrares.

“This land comes under the riverside (of Kosi river) and cannot be acquired. However, revenue records were forged and subsequently this land, worth over several hundred crores, was illegally occupied by Jauhar Ali University,” said a Revenue Officer.

According to this Officer, the forged documents aimed at fraudulently enabling occupation of the riverbed, now seem to provide strong evidence against Azam Khan, who appears to be in deep waters. Police sources said that several complaints relating to other cases of land grabbing by Azam Khan or his aides have been received at the office of the Superintendent of Police, Rampur.

Meanwhile, supporters of Azam Khan said that their leader had been the sole voice of opposition in the district and had been talking tough against the Modi government in Parliament.

“The action against him (Azam Khan) is not justified. He did not grab any land for his personal use,” said an SP office-bearer in Lucknow.  (Agency