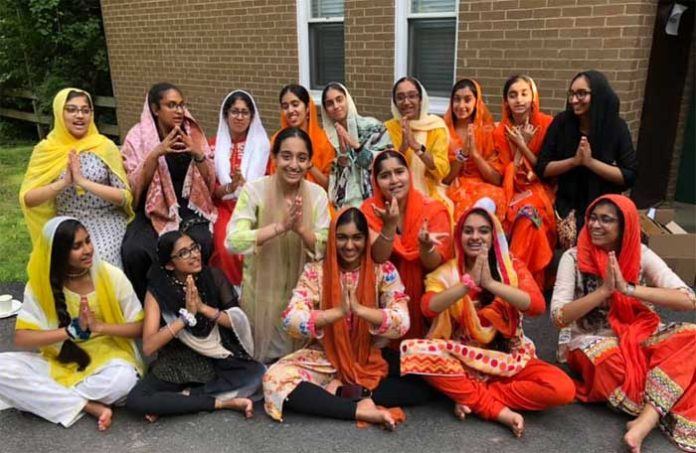 Over 105 Sikh youth were given leadership training based on Guru Nanak’s principles of meaningful life at a week-long camp held in Maryland, USA.

Camp Gurmat, a week-long annual Sikh youth camp, organized by the Washington-based Guru Gobind Singh Foundation (GGSF), was focused this year on the theme of Guru Nanak’s 550th birth-anniversary which is being celebrated by the Sikh community later this year. Sikh children from ages 7-17 traveled from all over the United States and Canada to be part of this camp, which is held in a green, wooded facility in Rockville, in the suburbs of Washington, DC.

Gurmat (Sikh philosophy) classes focused on the writings of Guru Nanak, such as Japji Sahib, the first hymn of Sikhism, and History classes discussed in detail Guru Nanak’s Udaasis (travels).

Guru Nanak traveled for 27 years and covered thousands of miles and went all the way to Mecca westward, up to Bangladesh and Burma in the East, to Sri Lanka in South, and up to Leh and Tibet on the North.

“These camps provide a safe and stimulating environment for Sikh kids to see themselves as change agents.” Said Hargurpreet Singh, chief organizer of the camp.

Dr. Rajwant Singh and Gagan Kaur Narang taught history to all the campers. Both researched material to keep the interest of the youth and at the same focused on the lessons from Guru Nanak’s interaction in various of the South Asian and Middle Eastern societies.

Dr. Rajwant Singh said, “Children were inspired by Guru Nanak’s perseverance in dealing with so many challenges and difficulties during his travels. It taught them how one can keep balance in the face of adversity.”

Herman Singh Basra and Bhai Gurdarshan Singh, Granthi of GGSF, taught Sikh philosophy. Bhai Gurdarshan Singh said, “Japji Sahib is the foundation of the Sikh faith and it is critical that youth growing up in America learns about this invaluable gift of Guru Nanak to the entire humanity.”

Harjot Singh and Jaspreet Singh taught Gatka, the Sikh martial art, to the campers and had organized a gatka show. Parents and relatives of the campers flocked to have a glimpse at this high energy meet of the Sikh youth.

Gagan Kaur Narang said, “We were thrilled by the enthusiasm among the youth to meet with new friends and still have the desire to learn more about their own rich heritage.”

A group of 25 college-going and young professionals were the counselors who organized this camp creatively to prompt critical thinking among the attendees, as well to inspire them to take action for the betterment of the community and, ultimately, the world.
Jaspreet Singh, Sehejneet Kaur, Priya Kaur Narang and Inderbir Singh coordinated the counselors and had organized the week long calendar of activities.