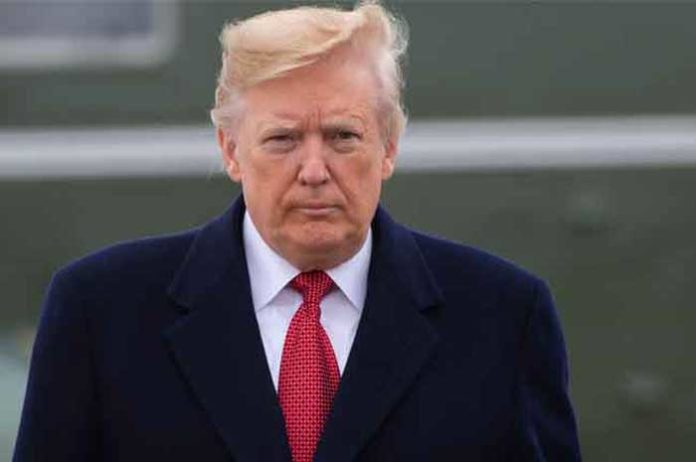 An American clothing company with no connections to India that uses the Sanskrit name ‘Dhvani’, has launched a media campaign showing violence against President Donald Trump, causing confusion and problems for Indian cultural organisations.

After the company placed a nine-metre advertisement in Times Square showing Trump lying on the ground in front of the White House with a woman putting her foot on his face and tying him up, Indian cultural organisations with a similar name mistakenly received strong protests.

A cultural organisation named ‘Dhvani’ in Oregon, the same state as that of the clothing company, cancelled a Carnatic Composers Day classical music event on Saturday after being “unfairly targeted” and receiving a “flurry of hateful emails” that caused concern, according to its press release.

The two-decade-old Indian American organisation Dhvani, which “promotes education, preservation, and dissemination of art forms of India”, said: “Some individuals have mistaken us for the clothing brand dhvani.com, which has placed a controversial billboard advertisement in New York City.”

It is an independent “organisation focused solely on supporting and promoting art forms of India, and is not affiliated or partnered with any entity”.

An official of the Indian-American organisation told IANS that it did not want to add anything more to what is in the press release because it wanted to “promote healing”.

A different person familiar with the Indian cultural organisation said that the hate mails and threats have been reported to law enforcement and some of those who sent them apologised when they came to know they had mistakenly targeted a cultural organisation with no ties to the clothing company behind the anti-Trump campaign.

Dhvani, which means sound at its root in Sanskrit, is used by cultural groups involved in music.

The clothing company sells yoga and sports clothing and is registered with Oregon state under the name Dhvaniwear with David A. Brown shown as the owner.

Apparently the yoga clothing it sells is the link to the Sanskrit word that is its name.

Brown, the CEO of the clothing company, which has other violent portrayals of Trump on its website, said: “We’re not afraid to make bold statements by exercising our first amendment rights,” a reference to the constitutional amendment guaranteeing freedom of expression.

So far, no national leader of the Democratic Party has criticised the clothing company’s campaign showing violence against the President, even though they routinely accuse him and his supporters of inciting violence.

The clothing online retailer said it was protesting a rule by the Trump administration prohibiting those getting funds from providing advice on abortions except in cases of medical emergency, rape or incest.

It said it will make contributions to women’s healthcare providers and fight the prohibition.

Planned Parenthood, the largest NGO that provides birth control and reproductive health services, repudiated the ad and turned down the contributions.

The group’s senior Vice President Melanie Newman said: “Planned Parenthood does not endorse this campaign, nor will we be accepting funds raised by this campaign.”

Planned Parenthood stopped taking government funds in August rather than comply with the new regulation on abortion described by its opponents as a “gag rule”.

Although the Supreme Court struck most laws banning abortion in 1973, it is still a controversial matter in the US with many Christian churches opposing it.

A large section of the Republican Party and Trump’s base want to totally outlaw abortion, while many Democrats want to loosen the restrictions on abortions further allowing it in late-term pregnancy.

One of Trump’s election pledges was to end abortions in most case and his administration has been enacting rules towards this end while the Supreme Court verdict allowing abortion stands.  (Agency)