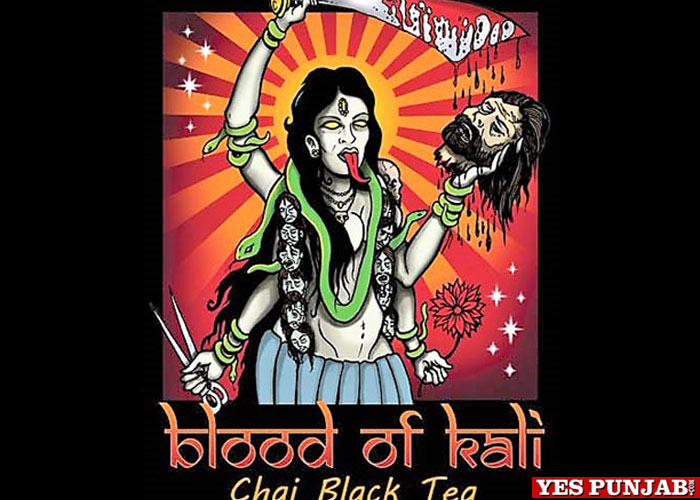 Distinguished Hindu statesman Rajan Zed, in a statement in Nevada today, said that goddess Kali was highly revered in Hinduism and was meant to be worshipped in temples or home shrines and not to be trivialized in a re-imagined version to sell tea. Inappropriate usage of Hindu deities or concepts or symbols or icons for commercial or other agenda was not okay as it hurt the devotees.

Zed, who is President of Universal Society of Hinduism, also urged Coffee Shop of Horrors and its CEO to offer a formal apology; besides withdrawing from online and store sale the “Blood of Kali” teabags carrying re-imagined images of goddess Kali.

Hinduism was the oldest and third largest religion of the world with about 1.1 billion adherents and a rich philosophical thought and it should not be taken frivolously. Symbols of any faith, larger or smaller, should not be mishandled, Rajan Zed noted.

Zed indicated that Kali was a goddess for Hindus, and a distorted portrayal of her with green snakes around her neck and arms and a pair of scissors in one hand could be disturbing for the devotees. Moreover, selling black tea as Kali’s blood was belittling of sacred beliefs.

Hindus were for free artistic expression and speech as much as anybody else if not more. But faith was something sacred and attempts at trivializing it hurt the followers, Rajan Zed added.

Goddess Kali, who personifies Sakti or divine energy, is widely worshipped in Hinduism. She is considered the goddess of time and change. Some Bengali poets described her as supreme deity. Moksh (liberation) is the ultimate goal of Hinduism. There are about three million Hindus in USA.

Coffee Shop of Horrors; launched in 2007; sells coffee, tea, hot cocoa, candy; besides its Cafe Menu in its Montverde and Tavares locations in Greater Orlando. It claims: “We will sell nothing that’s over 30 days old”. Its “Blood of Kali” Chai Black Tea (3-ounces bag of loose-leaf tea) was priced at $10.99 and was a “traditional blend of black tea and finely ground cardamon, cinnamon, ginger root, black pepper and cloves”.