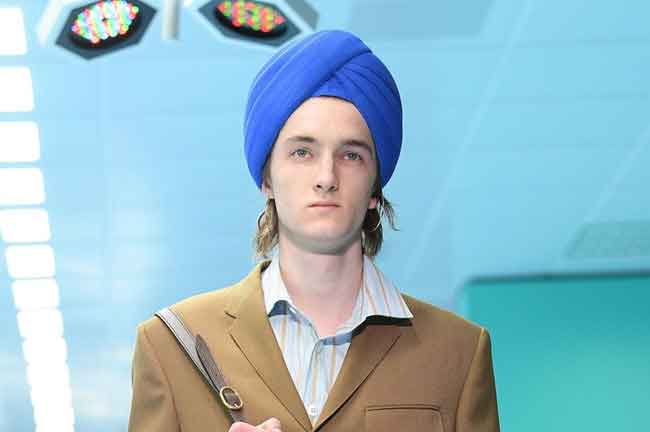 Washington, May 18, 2019 (Yes Punjab News)
Famed Italian designer, Gucci, faces backlash following the advertising of their new fashion head garment, “Indy Full Head Wrap.” This accessory which sells for $800 USD resembles a Sikh turban. The turban is a sacred article of faith in Sikhi. This fashion accessory clearly undervalues the meaning and history of the turban or dastaar in the Sikh faith.

This accessory was originally modeled by a Caucasian male who wore it upon his head with his shoulder length hair exposed in the Gucci Milan Fashion Week show Winter 2018. Initially, Gucci did face backlash.

Most of the criticism however, was surrounding the model being Caucasian and not a person of color, more specifically South Asian. However, now with the item being sold in stores like Nordstrom there is a greater outrage from the Sikh community.

This level of cultural appropriation completely deprecates the Sikh people, their faith and history. The turban is synonymous with the Sikh people. Not only were Sikhs outraged by this level of discrimination, they were insulted by the cost of the accessory. One of the main creeds of Sikhism is equality. Treating an article of faith and using it for profiteering is insensitive at best and has reverberated within the community.

United Sikhs initiated discussions with Nordstrom, explaining the cultural insensitivity at hand as well as complete disrespect to the Sikh community. Jasmit Singh, United Sikhs’ Chief Operating Officer was in direct communication with the corporate office of Nordstrom which led to them removing the items online and their brick and mortar locations.

Nordstrom has also publicly apologized on Twitter stating, “We have decided to stop carrying this product and have removed it from the site. It was never our intent to disrespect this religious and cultural symbol. “We sincerely apologize to anyone who may have been offended by this.”

United Sikhs welcomes this quick action and is in discussions of working to prevent such occurrences in the future. While Gucci has not made an official statement addressing the backlash, cultural insensitivity and religious disregard, it is hopeful that the fervor created will motivate Gucci to engage and respond in a positive manner. United Sikhs will continue to engage Gucci and has reached out on multiple levels and we look forward to reaching an amicable resolution.

Moving forward, our hope is that brands, fashion labels and icons are more culturally aware and competent when designing. Our goal at United Sikhs is that through this level of awareness, they become more respectful towards cultures and religions, thus avoiding appropriation but rather move towards appreciation.