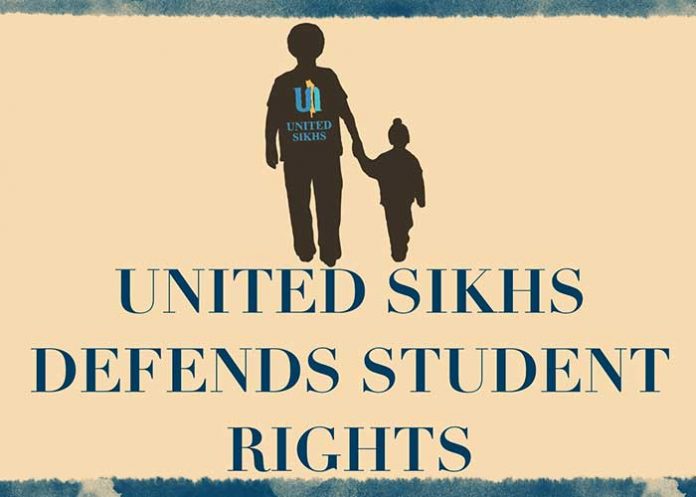 Brantford ON (Canada), November 13, 2020 (Yes Punjab News)
United Sikhs’s continuing advocacy for the sixteen-year-old Sikh student from the Assumption College School in Brantford, Canada led to an apology from the School Board and promise to address the concerns United Sikhs raised in a letter on November, 2020. The school stated that they are committed to ensuring that all students feel included and welcome and have taken some steps to achieve this but there is much more work needed.

The United Sikhs legal team has been closely working with and assisting the Sikh student and his family and issued an advocacy letter that raised serious concerns regarding School’s wrongly identifying the 16-year-old as a 10-year-old branding a gun in the mirror in an Instagram photo. Last month, the School involved the police before seeking the parents’ input.

After receiving United Sikhs’s letter, the school board agreed to discuss the issue with the parents and the United Sikhs, Canada legal team on a Zoom call. In the meeting, United Sikhs made it clear that the student was not seeking empathy but rather real answers to the concerns that Sikhs are oftentimes discriminated against in the school and in society generally. The student’s confrontation with the police has caused the student and his parents severe anguish and they continue to be distraught.

United Sikhs emphasized the importance of reconciliation for the student and his family who deserve an apology from the individual who wrongly accused the student. The School stated they are investigating and agreed to a follow up meeting and to address the effect of missing class and the effect of trauma on the student. As of today, the school has not yet identified the individual and we will continue to press for answers.

United Sikhs demands included that the school do more to educate their staff and students about Sikhs and Sikhism. “It is important that the School commit to reform its curriculum and organize special events to include teaching acceptance of Sikhs as valued members of the Canadian society, states Sukhwinder Singh, Director, United Sikhs, Canada.

The school states that they are willing to take a positive step in this direction and posted a Twitter message during Remembrance Day highlighting the sacrifices that Sikh-Canadian Buckham Singh made for Canada despite Canada’s extreme discriminatory practices in that time.

“United Sikhs advocates that all Sikhs and all marginalized youth, in any part of the world, in any school, feel safe and included. Every student should be free of bullying by their peers and especially free from systemic discrimination in schools,” stated Wanda Sanchez Day, United Sikhs’ Chief Legal Officer and National Legal Director who is assisting the Canada legal team.