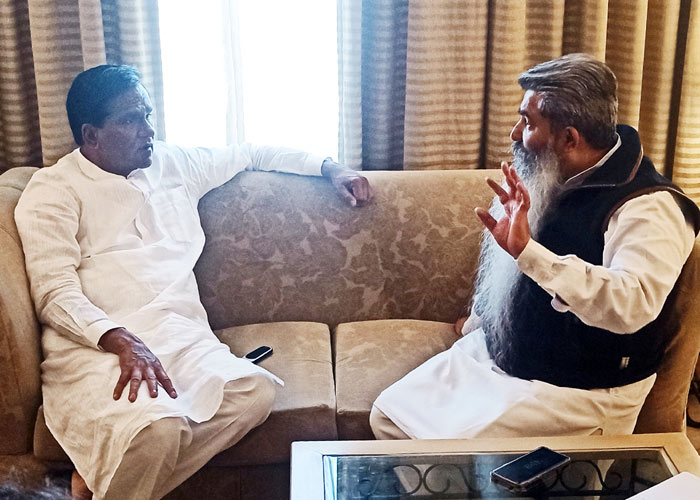 Punjab Food, Civil Supplies & Consumer Affairs Minister Mr Bharat Bhushan Ashu has appealed to the Union government that pertaining to shortage of storage food grains capacity in Punjab, they should formulate an effective policy to check damage of food grains in the state. He said that due to this reason, Punjab is now unable to bear annual loss of more than Rs 2,000 crore.

Mr Ashu said this during his meeting with Union Minister of State Ministry of Consumer Affairs, Food and Public Distribution Mr Raosaheb Dadarao Danve at Ludhiana today. The Union minister is on a two day visit to the state.

While strongly taking up the issue of shortage of food grains storage capacity in Punjab, Mr Ashu said that although Punjab has been the food bowl of our country for the last several decades, but the responsibility of managing storage of procured food grains is also meted on the state.

Mr Ashu said that Punjab not only grows food grains, but they are also asked to manage their storage for up to three years, whereas food grains are not stored in Rajasthan for more than three months. He said that if the Union government formulates a policy, food grains from Punjab can be stored in states such as Rajasthan or some others. Mr Bharat Bhushan Ashu also advocated sale of food grains from Punjab to countries such as Afghanistan or some other South Asian countries.

He said that for lifting of food grains, special permission is granted for only 10-12 goods trains daily, which should be increased to at least 20. He also demanded that under the Private Entrepreneur Guarantee (PEG) scheme, approvals for construction of godowns with at least 20 lakh metric tonnes capacity should be granted.

He said that adding to it, around 130 lakh metric tonnes of wheat is expected to arrive in Mandis in the month of April 2020, and Punjab would be unable to store such massive inflow of food grains due to shortage of storage capacity.

Union Minister Mr Raosaheb Dadarao Danve also appreciated the Punjab model of Public Distribution System and said that if food grains are distributed to the beneficiaries for a collective period of six months in entire country, then the problem of storage as well as damage of food grains would be resolved automatically.

He said that with the adoption of this system, 600 lakh tonne of food grains can reach the households in one go and the beneficiaries would be benefitted to a large extent. He also showed keen interest in implementing the Punjab model of PDS in entire country.

Mr Danve informed that for increase the food grains storage capacity, 31 silos would be set up in Punjab. He said that 21 sites for this purpose have already been shortlisted, whereas the remaining sites would also be finalised shortly. He said that it would check the problem of storage to a large extent. He also assured that he would take up all problems related to Punjab with Prime Minister Mr Narendra Modi.