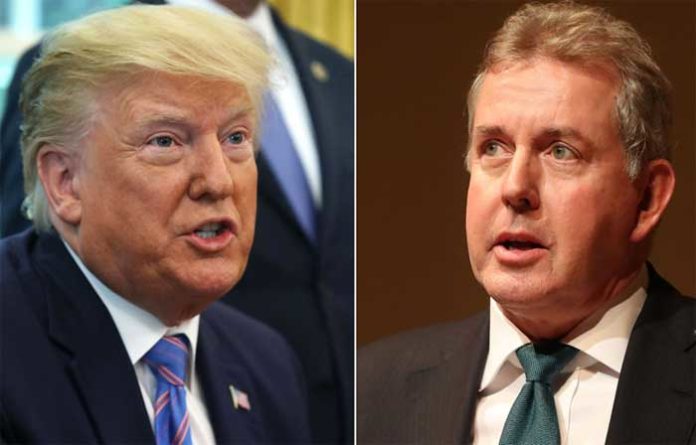 Kim Darroch, the UK’s Ambassador to the US, has the outgoing British Prime Minister Theresa May’s “full support”, despite American President Donald Trump saying he will no longer work with him, the Downing Street has said.

The remarks come after Trump said on Sunday night that Darroch “has not served the UK well”, in response to the latter’s leaked emails where he called the American leader’s administration “inept, insecure and incompetent”, the BBC reported.

A Downing Street spokesman said on Monday: “We have made clear to the US how unfortunate this leak is. The selective extracts leaked do not reflect the closeness of, and the esteem in which we hold, the relationship.”

But he said ambassadors needed to be able to provide honest assessments of the politics in their country, and the Prime Minister stood by Darroch.

“The UK has a special and enduring relationship with the US based on our long history and commitment to shared values and that will continue to be the case,” he added.

Confidential emails from the UK Ambassador, leaked to the Mail on Sunday, contained a string of criticisms of Trump and his administration, describing the White House as “clumsy and inept”.

Darroch, who became ambassador to the US in January 2016 about a year before Trump took office, questioned whether this White House “will ever look competent” but also warned that the US President should not be written off.

On Sunday the US President responded saying “we’re not big fans of that man and he has not served the UK well”, but on Monday he escalated his response with a series of tweets criticising Mrs May and her handling of Brexit, reports the BBC.

“What a mess she (May) and her representatives have created… I do not know the ambassador, but he is not liked or well thought of within the US. We will no longer deal with him.”

The US State Department declined to comment on Trump’s remarks, but the Ambassador was disinvited from a dinner held at the White House on Monday night for the Emir of Qatar.  (Agency)