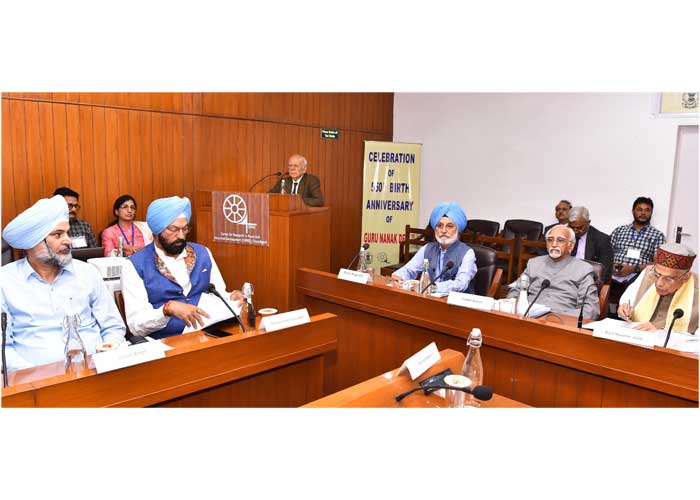 As a part of the year long celebrations organized to by Government of Punjab to mark the 550th Gur Purab of Sri Guru Nanak Dev ji, a two-Day International Conference on Sri Guru Nanak Dev ji’s philosophy to spread peace, harmony and human happiness kick started at Centre for Research in Rural and Industrial Development (CRRID), Chandigarh .

The conference was organized in collaboration with Government of Punjab and Indian Council of Social Science Research (ICSSR), New Delhi.

The addresses revolved around the need to realize the relevance of the philosophy of Sri Guru Nanak Dev Ji in promoting peace, harmony and happiness in the world plagued with wide-spread discontent and violence caused by social and political discrimination, economic exploitation, inequality, domestic violence and atrocities against the weaker sections of the society.

M. Hamid Ansari, Former Vice President of India, gave the presidential address. He said that societies today face twin pandemics of religiosity and strident nationalism, which have come to diminish the essence of peace, harmony and human happiness.

Humanity, according to him, thus could only be saved if both these pandemics are evaded by a language of understanding that draws upon cultural values ensured by modern, secular state and respect for human rights. This is reflected in message and teachings of Guru Nanak, said he.

Mr. Murli Manohar Joshi, Former Minister of Human Resource Development (HRD), Govt. of India, started his keynote with the MoolMantra and talked about the role of hard work, sharing and unity in the current turbulent world and its transformation to peace, harmony and happiness.

He suggested learning to resolve the conflict of virtue and vice through Guru ji’s teachings. He also emphasized on the need to respect environment as preached by Sri Guru Nanak Dev ji.

The inaugural session was followed by thematically distributed parallel technical sessions on the sub-themes namely “Spirituality, ethics and morality in Guru Nanak’s Philosophy”, ”Interfaith dialogue in terms of philosophy of Guru Nanak”, ”Social, Economic and Cultural equality as means of Peace, Harmony and Happiness”, ”Gender Equality in Sikh Tradition and Gender Violence in Contemporary India”, ”the Concept of Dignity of Labour in Guru Nanak’s Vision” and ”Environment Protection in Guru Nanak’s Teachings and their Contemporary Relevance. ”

The valedictory Session of the conference is to be held on 8th November wherein Dr. Manmohan Singh, Former Prime Minister of India and Capt. Amrinder Singh, Chief Minister of Punjab along with his cabinet colleagues are expected to grace the session to mark the conclusion of the international conference.