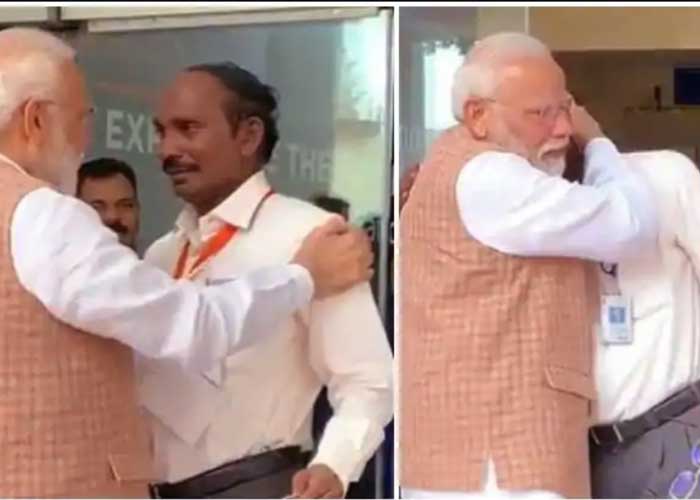 The video of Prime Minister Narendra Modi hugging ISRO chief K. Sivan after he broke down has gone viral and the twitterati has not stopped commenting.

The Indian Space Research Organisation (ISRO) on Saturday lost communication with the moon lander Vikram, and despite a motivational speech by Modi, who had flown in on Friday night to watch the lunar landing, Sivan could not hold back his tears and broke down as the Prime Minister was about to leave.

In a nearly minute-long video, one can see Modi hugging and patting Sivan as the scientist breaks down.

“Modi’s a compulsive hugger. But this is his greatest hug, because it wasn’t created for the cameras and for PR. ISRO’s Kannada account described it as ‘A lesson in inspirational leadership’,” a user tweeted.

“As Commissioner of Police, I was witness to see the PM consoling a sad Dr Sivan, so much of leadership, calmness in crisis, restoring confidence to learned scientific community and creating hope and progress for the nation… Valuable lessons I learnt today,” wrote Bhaskar Rao, Bengaluru Police Commissioner.

Modi was also praised by Daniel Carmon, former Israeli ambassador to India. He wrote: “What a moment! What a gesture! @PMOIndia @narendramodi @isro #KSivan #Chandrayan2.”

“I am very emotional seeing @isro chief being imotional and hugged and consoled by our beloved PM @narendramodi ji. You both have won millions of hearts. No matter what is the result we will succeed one day. The whole nation is behind you. Congratulations for achieving this far,” wrote a user.

“My PM is human… which is beyond everything… this is why he is different from others… and this is why we chose you sir,” wrote another.

Another user tweeted: “They don’t teach you leadership at Harvard Business School. Proud of Modi, Sivan and his ISRO team.”   (Agency)