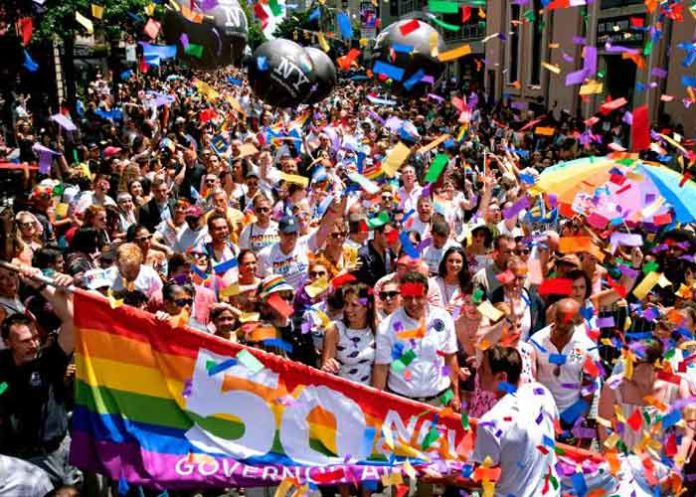 As many as 150,000 people waved rainbow banners and marched in the WorldPride parade in New York city to express solidarity with the LGBTQI community.

Multicoloured floats, stilt-walkers, drag queens, heterosexuals, lesbians, gays, non-governmental organization members, activists, actors, television performers and elected politicians were all on hand in the Big Apple on Sunday to celebrate gay pride and the 50th anniversary of the iconic Stonewall riots, which was a key turning point in the struggle for equal rights for the community, reports Efe news.

Also on hand was iconic fashion designer Donatella Versace, who participated riding on the Stonewall Inn float and told Efe news that she felt proud to be present as the “new ambassador” of the emblematic gay bar.

“I think it’s very appropriate that we’re here today and that we’re fighting for human rights,” Donatella said at the corner of Fifth Avenue and 26th Street, where the parade got under way.

Donatella’s brother Gianni, who founded the Versace fashion house, was openly gay. He was shot dead in 1994.

The first Gay Pride parade was staged in 1970 to commemorate the first anniversary of the Stonewall riots on June 28, 1969, after police raided the Stonewall Inn gay bar resulting in riots that are widely considered to be a watershed moment in the modern gay rights movement.

The march was headed, as it has been every year since 1986, by members of the female Sirens motorcycle club, who with multicoloured pairs of wings on their backs rode their “choppers” through the city streets.

Authorities said they expected between three and four million tourists in the city for the Pride celebrations that kicked off on June 27 and will conclude Sunday night with a concert in Times Square and with a performance by pop icon Madonna at a mini-festival on the banks of the Hudson River.

A few hours earlier in New York, the Queer Liberation March – an alternative to the “main” march – was staged with thousands of participants, although the alternative parade shunned the floats sponsored by corporations, marketing and the police presence at the official Gay Pride march.  (Agency)