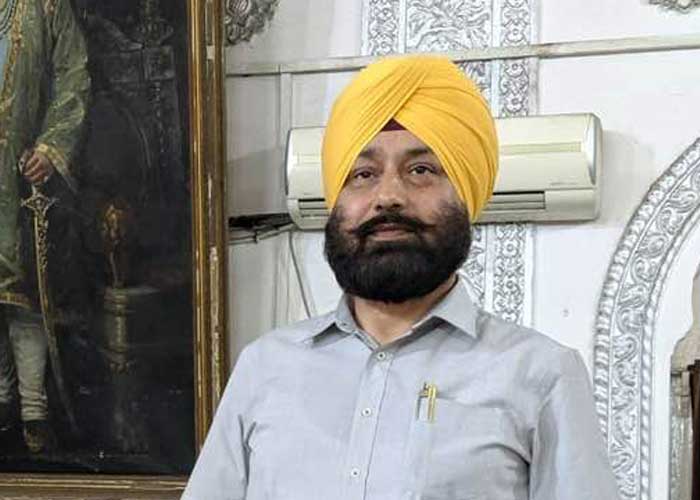 He’s pained to see agriculture fields emitting plumes of smoke at several places in Punjab by farmers who opt to go in for the quicker option of getting rid of the crop residue by setting them afire.

Lakhmir Rajput, Additional CEO regarding celebrations of 550th birth anniversary of the first Sikh master, Guru Nanak Dev, has taken cudgels by penning songs and poems in local dialect to spread awareness to check the burning of rice stubble, a common affair that chokes the whole of north during onset of winter, especially the national capital, with heavy smog cover.

Also in Punjab in recent years there has been an explosive upsurge of man-made calamities triggering a drug-infested killer blow to the mental ecology as well as socio-political fabric of this once exemplary state in India.

Rajput is deeply rooted in his social conscience — albeit to a varying degree.

With his humanist leanings, he is fully dedicated to the nurturing of Punjabi minds, both young and old, with his soul-pricking reformative poetry.

“A few years ago I witnessed a road accident due to dense smog. So I decided to spread awareness through songs and poems about the affects of stubble burning to mother nature,” Rajput told.

Without letting his troubled spirit sag into helpless pity, poet Rajput, as a socially conscious individual, has long since chosen to act at his personal level onto the ‘awakening of self’ of the common individuals.

Instead of longing to be ‘everywhere’ like majority of the poets, he has rather chosen to be ‘somewhere’ and take pride in doing something worthwhile.

But should art, or literature for that matter, be subservient to social concerns?

This age-old question can now be precisely answered with a simple question: Why not?

He believes he’s not an aesthete like Oscar Wilde whose god is beauty, but he is a realist whose passion is social engagement.

Reminded of his sacred duty by the mother nature, Rajput, Additional Director with the state Tourism and Cultural Affairs, told: “If ever an author could make others feel the world around them to care for it, she or he should not have written in vain.”

He writes in a particular, untampered ecstasy, laced with inner musicality derived from the vernacular imagery of his beloved Punjabi culture.

Punjab, once so named because of its five rivers flowing through its vast fields, has long since doomed into a man-made world of drugs infested barren landscapes, full of young addicts.

A majority of these youngsters, once full of vigour and dancing on the charming tunes of ‘bhangra’ in the fancy landscapes, and playing ‘kabaddi’ in the vast fields, are now doomed incapable of oozing even a dim cheer.

They are now left confined to the nooks of discarded houses to perish themselves with needles and syringes laced with killer drugs.

A firm believer in regular blood donation, Rajput’s poems propagate day-to-day wisdom to its listeners and readers, and catalogue the catastrophes the state is suffering from.

By composing motivating verses and songs about Mahatma Gandhi National Rural Employment Guarantee Act (MGNREGA) scheme, or against drug addiction or stubble burning by the farmers or saving the water, which he sings himself, or collaborate with professional singers, the author of two books — ‘Talaash’ and ‘Yaadan de Panne’ — has helped controlling the dense smoke problem and depleting water table in the region.

As a mark of respect for the historic 550th Prakash Parb of the first Sikh Guru, which will the presence of Prime Minister Narendra Modi on November 12 at Sultanpur Lodhi, even Chief Minister Amarinder Singh is appealing to the farmers not to resort to paddy stubble burning.

The Happy Seeding machines being distributed by his government would not only help in stubble management, but also ensure increased productivity for the farmers.

Amarinder Singh is saying paddy stubble burning, besides damaging the texture of soil and human health, has emerged as a major environmental threat.

The state is popularising water saving technologies, such as drip irrigation, through 80-90 per cent subsidy, besides introduction of the direct benefit transfer for electricity scheme to directly compensate farmers who save electricity and thereby groundwater.  (Agency)