Home Global The politics behind the Kamala Harris ‘Vogue’ debut 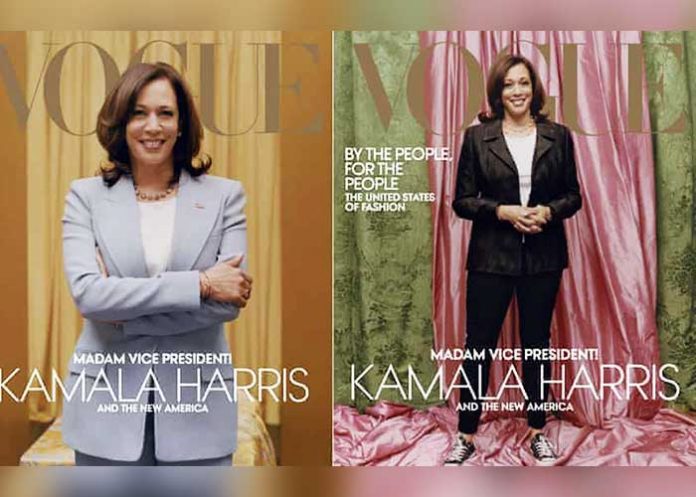 New Delhi, Jan 15, 2021-
Fashion’s top trending topic this week: the Kamala Harris, AmericanVogue cover. It seems everyone has a reason to critique it–even though Vogue’s Anna Wintour has explained the magazine’s approach to this unusually casual and relaxed cover. There is an endless list of the accusations against the images, especially the print edition cover where the Vice President Elect wears a blazer and Converse sneakers, all pulled from Harris’s own wardrobe. These were not chosen by the Vogue Fashion team–something which goes against the norm of a fashion magazine’s usual practices.

America has never had a female Vice President Elect before–so there is no real precedent to compare this cover to. But First Ladies have graced Vogue’s cover–Hilary Clinton wore an Oscar de la Renta for her December 1998, a designer she has a longstanding friendship with and Michelle Obama has been on the cover three times. Obama, a natural clotheshorse, and like Jacqueline Kennedy (though she never made it to the fashion glossies cover) was a First Lady made for fashion.

Of course Britain, like India, has had a female prime minister, Margaret Thatcher. The term “handbagging” a word used for a way of intimidating opponents can be credited to this British Prime Minister who made the handbag an ‘It accessory’ before the term even existed. While pieces of her wardrobe are now considered a part of fashion history, she was never on the cover British Vogue back in the 1980s. On the other hand, Meryl Streep did grace the cover the month the film, Iron Lady, where she played Thatcher, was released. Thatcher was in 10 Downing Street for over a decade, while she might not be known for her designer wardrobe she definitely had her own personal style. Though if she had appeared on the cover of the British edition of the magazine back then, she would have had to ditch her own ‘armour’– skirt suits and pussy bows, something the Iron Lady would never have agreed to.

Harris however got to stick to her own wardrobe. There are many elements of the cover that are questionable: the clothes seem ill fitting and the lighting does seem to have lightened her skin. Then there is the backdrop, it looks like it was shot on the set of the Netflix show Bridgeton, at the home of the Featherington’s, though it seems the pink and green backdrop is an ode to the colours of the first American Black sorority, Alpha Kappa Alpha, that Harris was a member of as a student. But I still like what this cover stands for. That every woman’s personal style should be celebrated. That you do have to confirm a certain style formula to be on the cover of a fashion magazine. And that the cover of a fashion magazine is not just for skinny models and beautiful actresses.

Of course I still want to see glamorous covers of fashion magazines, I mean who does not like seeing those picture perfect images– but mixing it up every once in a while adds some freshness. While it might have been interesting to see Harris receive the famous ‘Vogue make-over’– but I am sure that would receive flak too — for unnecessarily dolling up a woman of style and substance. I think the comment made by Elizabeth Paton, International Styles Correspondent at The New York Times, on her personal Instagram account says it well, “Female Politicians currently appear damned if they do/damned if they don’t with fashion mag covers. Too fashion forward or fantastical, then critics say they look elitist and out of touch.”

So yes its styling was a departure from what we expect from Vogue, but seeing her on the cover brought a smile to my face, and the interview was both respectful and informative. That picture has made me want to own a pair of converse sneakers.

The writer Sujata Assomull is an IANSlife columnist. Assomull is the author “100 Iconic Bollywood Costumes” and was the Founding Editor In Chief of Harper’s Bazaar, India. (Agency)