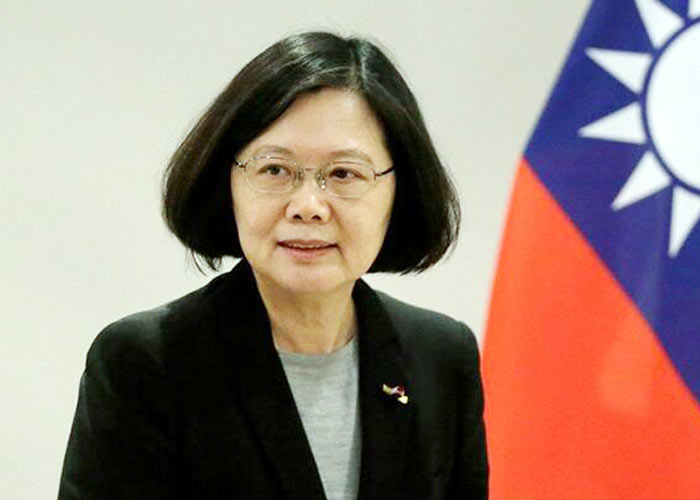 Taiwanese President Tsai Ing-wen on Thursday slammed China, saying its “diplomatic offensives and military coercion pose a serious challenge to regional stability and peace” and that Hong Kong was “on the verge of chaos” due to the failure of ‘one country, two systems’ political framework of Beijing.

In her National Day address, she said China is challenging “free, democratic values and the global order through a combination of authoritarianism, nationalism, and economic might”.

Tsai said China “is encroaching on us through sharp power”, and asserted that Taiwan would work with like-minded nations to ensure that the “peaceful and stable cross-strait status quo is not unilaterally altered”.

Describing Taiwan “as the strategic forefront of the Indo-Pacific region”, she said it has become “the first line of defence for democratic values” at a time when “we are witnessing China’s rise and expansion”.

As a crucial member of the region, Taiwan must fulfil its responsibilities to the international community, the President said, adding: “We will not act provocatively or rashly; rather, we will work with like-minded countries to ensure that the peaceful and stable cross-strait status quo is not unilaterally altered.”

The world is “still changing fast, and the changes are even more dramatic”, she said and referred to the continuing US-China trade dispute. “And not far from Taiwan, Hong Kong is on the verge of chaos due to the failure of ‘one country, two systems’,” Tsai added.

She said if China’s ‘one country, two systems’ is accepted, there would no longer be any room for the existence of Taiwan.

Standing up to protect national sovereignty is not a provocation but “my fundamental responsibility”, the President said and asked people of Taiwan to “stand up and defend ourselves” when freedom and democracy are challenged and existence of Taiwan is threatened.

She said Taiwan has together faced many serious challenges over 70 years and “rather than defeating us, these challenges have made us stronger and more determined”.  (Agency)