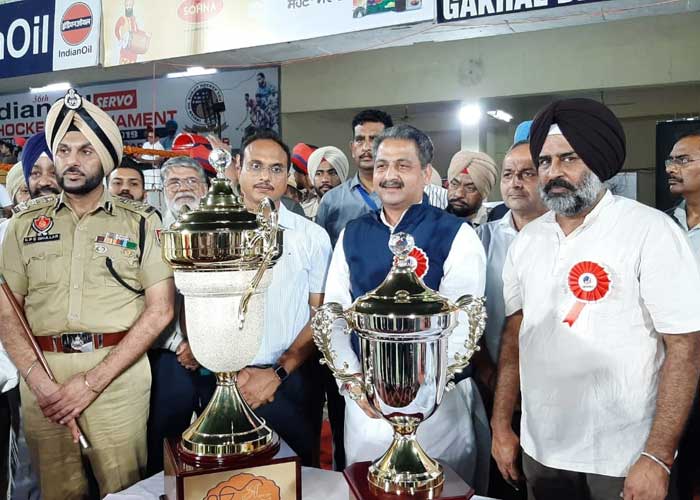 The minister accompanied by MLA Jalandhar Cantonment Mr Pargat Singh, MLA Mr Rajinder Beri, said that the state government was committed for making Punjab a front ranking state in the arena of sports.

The Minister said that Captain Amarinder Singh government has alrday set the wheels off the state in motion to create a sports environment in the state. He said that number of NGOs and private entrepreneurs have been roped in to boost sports and sportsmen in the state.

Mr. Singla said that said that Chief Minister, Captain Amarinder Singh was undertaking specialized efforts to uplift the level of sports in the state for which Punjab has came out with a comprehensive sports policy.

The Minister said that New Sports Policy focuses on securing a livelihood for the players, who bring laurels for the state and country in the field of sports, besides ensuring their holistic development.

The Minister also said that his department is going to form a comprehencive policy for motivating sports and creating infrastructure for the students of Governent schools in the Punjab.

Complementing the organizers for holding the tournament, the Minister said that they have upheld the legacy of great olympian Mr Surjit Singh alive. He said that the organizers have laid the foundation of a great movement aimed at revival of the national game.

Mr. Singla also lauded the role of organizing committee for holding this event every year thereby acting as a nursery for producing the legends in field of Hockey.

He said that along with the society the civil and Police administration of the district also deserves a kudos for organizing this event.

Declaring the event open, The Cabinet Minister hoped that this tournament play a key role in making Punjab a healthy, progressive and prosperous state. He also thanked the sports lovers for converging at the stadium for witnessing this gala event.

that stupendous efforts of the Surjit Hockey for holding the tournament, in the memory of former skipper of Indian Hockey team and Olympian late Mr. Surjit Singh Randhawa, were really laudable. They expressed hope that this tournament would offer an opportunity to the million of Hockey lovers to enjoy this gala event.

They also expressed hope that this prestigious tournament would enable the young players to exhibit their unbounded talent so that they could be further groomed for International events.