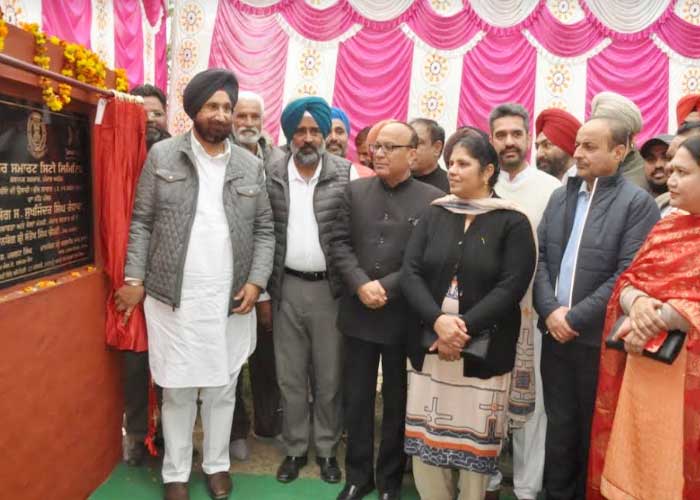 “Every promise made by the Punjab Chief Minister Captain Amarinder Singh led state government will be fulfilled to ensure comprehensive growth of the state and prosperity of its people”, said Mr Randhawa on the sidelines of laying foundation of the projects.

The Minister, according by MLAs Mr Pargat Singh, Mr Rajinder Beri, Mr Sushil Kumar Rinku and Mr Avtar Singh Bawa Henry, assured that no stone would be left unturned to usher in an era of unprecedented growth and development in every nook and corner of state. He said that the Captain government was fully committed to fulfil every promise made to people of Punjab. Mr Randhawa said that very soon every promise made with the populace of Punjab would be fulfilled.

On a query, the Minister said that the proposal for further beefing up security in Jails across the state was already under the active consideration of the Punjab government. He said that the proposals for installing body scanners, jammers and other hi-end machinery was already in the pipeline. Mr Randhawa further said that every single seizure in the Jail from the inmates or their kin was being now brought on record and a FIR was being lodged regarding it.

The Minister further said Punjab Chief Minister Captain Amarinder Singh has already decided to commemorate the 400th birth anniversary of the Ninth Sikh Guru, Sri Guru Teg Bahadur ji, ‪on April 18, 2021, with year-long celebrations ‪beginning April 12 this year. He said that Sri Guru Teg Bahadur Ji’s unparalleled and supreme sacrifice to uphold the value of righteousness, truth and freedom of faith would be always be remembered by one and all, and Guru Ji’s teachings must be disseminated in every nook and corner of the world. Mr Randhawa said that committees have been constituted to coordinate and chalk out several programmes to be organised by various departments throughout the year, to spread the teachings of Guru Ji in an unsurpassed manner.

The Minister also said that BJP led Union Government at centre was pursuing the divisive policy through CAA and NRC. He said that the aim was to divide the people on communal lines. Mr Randhawa also questioned the silence of Shiromani Akali Dal leaders Mr Parkash Singh Badal and Mr Sukhbir Singh Badal in these vital issues haunting the minorities.

The Minister also slammed the Badals for misleading the people on Power in the state adding that the Shiromani Akali Dal had entered into agreement with private players which was causing huge loss to Punjab. He also assailed the SAD-BJP leaders for amassing huge wealth by unfair means. Mr Randhawa also said that people were fed up from the misrule of previous SAD-BJP alliance government and they would never vote for them.

Corporation and other officers were also present.