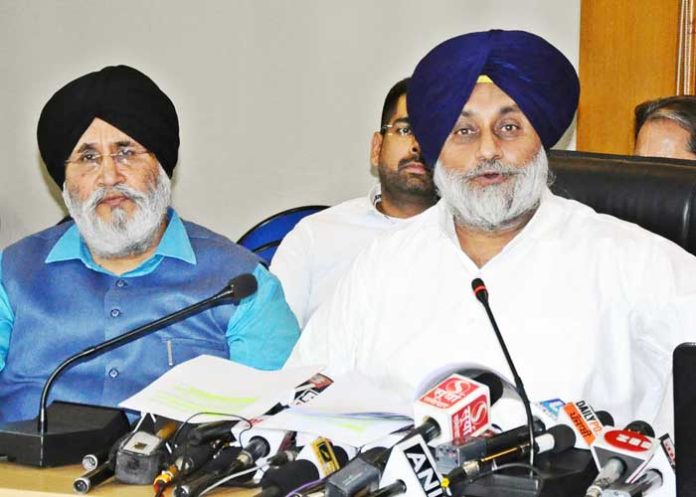 Shiromani Akali Dal (SAD) president Sukhbir Singh Badal today thanked Prime Minister Narendra Modi and the government of India for taking up speedy construction of the Kartapur Sahib corridor as well as addressing vital and long-standing issues related to the sentiments of the Sikh Sangat.

Addressing media persons here, the SAD President said the Union government had expeditiously starting work on a world class and state of the art passenger terminal building complex as well as an all weather bridge on the Ravi River to facilitate unrestricted and easy flow of pilgrims.

While appreciating the speed with which the Kartarpur Corridor was coming up on Indian territory, the SAD president said it was unfortunate that the Pakistan government was indulging in double speak.

“Pakistan is mouthing platitudes about the work it is taking up to make the Kartarpur Corridor a reality but the reality is that it is constructing a mere causeway on its side instead of a 320 meter bridge. Pakistan has put a cap on number of devotees to 700 per day and that too for restricted number of days per year.

Entry fee and permit costs proposed by Pakistan for pilgrims are also very high at Rs 1,600 per person on normal days and Rs 8,000 per person on special days. Pakistan also proposes to restrict this facility for only Indian nationals and People of Indian Origin (NRIs) cannot access it”.

Stating that all these conditions were unreasonable, Mr Sukhbir Badal urged the Pakistan government to have a large heart. “Unreasonable restrictions will mean that the Sikh ardas for “Khulla darshan deedare” will remain unfulfilled. The Pakistan government should waive off the permit and entry fee for devotees and allow entry of 5,000 devotees on normal days and 15,000 on special days”.

Speaking about the steps taken by the Prime Minister to resolve long pending issues of the Sikh community, Mr Badal said Sikhs worldwide were thankful to Mr Narendra Modi ji for establishing the SIT which opened all cases which had been discharged earlier. He said this had led to the conviction of Sajjan Kumar. “The case of Madhya Pradesh chief minister Kamal Nath has also been reopened and the Home ministry has written to the court for establishment of dedicated fast track courts to try 1984 genocide cases”.

The SAD president said in another far reaching decision, the Union government had accepted the SAD request and scrapped the local blacklist of Sikhs maintained by Indian Missions in countries like Canada, the USA, UK and Germany.

He said thousands of NRIs were suffering because of the local lists prepared by Embassies. He said even the official government black list of 314 persons had been curtailed to only 40. He said travel restrictions imposed on family members of black listed persons had been removed and now they could travel to India.

Mr Badal said the union government was also actively pursuing the SAD request for release of all Sikh prisoners languishing in jail after completion of their jail terms. “This matter is under process and progress is expected shortly”, he said adding this would go a long way in healing Sikh sentiments.

The SAD president also thanked the Home ministry for agreeing in principle to give compensation on humanitarian groups to all 325 Jodhpur detenues on the pattern of that given to 40 detenues by court.