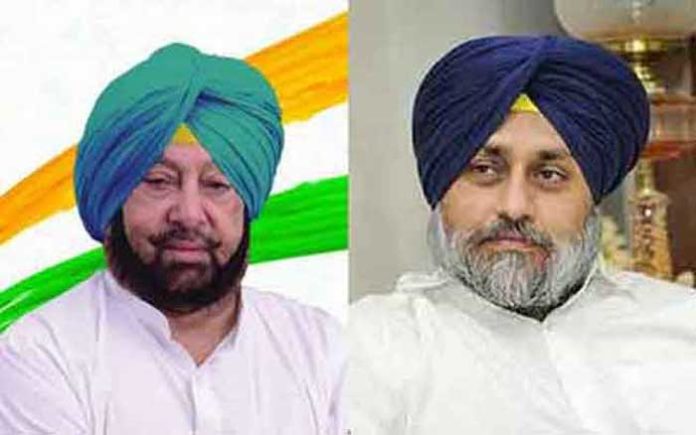 Punjab Chief Minister Captain Amarinder Singh on Saturday said the strange and senseless recent remarks of Sukhbir Singh Badal showed that the Akali leader had completely lost the political narrative, causing him to fumble for words and desperate to find a way out of the pathetic situation in which his party finds itself over the farmers’ issue.

The Shiromani Akali Dal (SAD) chief seemed to have been jolted into desperation by the entire Farm Laws saga, which had completely exposed the double standards of the Akalis, said the Chief Minister, adding that Sukhbir clearly had no idea what he is talking.

Captain Amarinder was reacting to Sukhbir’s remarks on the easing of `Rail Roko’ by the Kisan Unions and his suggestion that the state government should have taken SAD’s advice before coming out with the amendment Bills in the Vidhan Sabha. Sukhbir has accused the Chief Minister of colluding with the Centre to get the blockade of the farmers lifted.

Ridiculing Sukhbir’s suggestion on going to Akalis for advice, the Chief Minister quipped that “it seems the NDA government at the Centre had taken the advice of their then allies, the Akalis, in the matter of the anti-farmer, anti-federal and anti-Constitutional farm laws.” That would explain why they messed it up so badly and took the unilateral decision impose laws that are clearly designed to ruin the farmers, he added.

Terming the Akali president’s allegation of collusion between him and the BJP as ludicrous, Captain Amarinder said Sukhbir appears to be in a state of mental despair and denial, which is leading him to make such nonsensical remarks. “Does Sukhbir really believe that I would lead my party to political suicide with such an act?” asked the Chief Minister.

The only rational explanation for such preposterous comments would be that the SAD leader had lost all sense of proportion out of sheer desperation at his and his party’s political oblivion, which was no longer a distant possibility but a concrete fact, he added.

The Chief Minister also mocked Sukhbir over the latter’s demand for him to “come clean” on the subject of the state amendment Bills, aimed at negating the devastating effect of the central laws on the farming community.

“On the one hand you complain when I tell the legislators frankly in the House that the Governor/President may or may not give consent to the Bills, and on the other you say I’m not being honest,” he remarked, asking the SAD chief to make up his mind on where he and his party stand.

“The farmers are sick and tired of your games,” Captain Amarinder told Sukhbir, adding that it was SAD which was feeling the heat of the farming community – the reason why they are running around in circles on the Centre’s laws and the State’s Bills.

He reiterated his demand for the Akalis to explain to the people why they backed the central legislations if these were anti-farmer and whey they backed the state’s Bills in the Vidhan Sabha if they found them useless.

What his government had done with these Bills despite the risks and dangers involved was many times more than what the SAD had done as part of NDA’s Union Government in six years, quipped the Chief Minister.

He added that this was probably the reason for Sukhbir getting so flustered and frustrated, and causing the Akali leader to lie even more brazenly and shamelessly than he usually does.