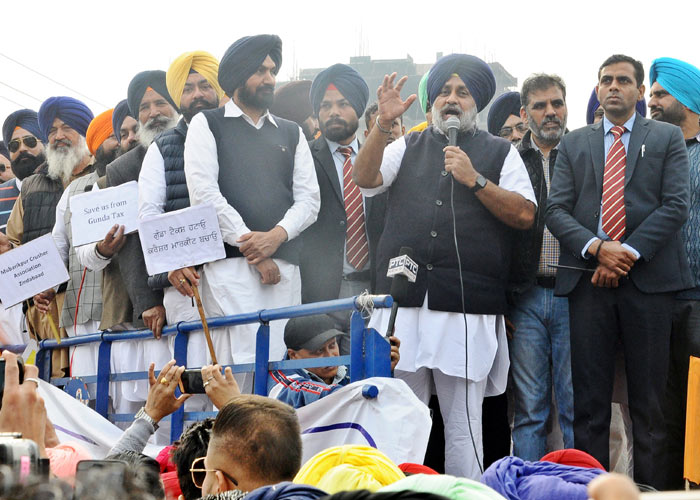 Shiromani Akali Dal (SAD) President S. Sukhbir Singh Badal today warned that civil and police officials helping local minister Balbir Singh Sidhu and other Congress leaders to indulge in illegal mining as well as collection of ‘goonda tax’ would be proceeded against as per law once a SAD-BJP government was formed in the State.

Addressing a massive dharna against ‘goonda tax’ and illegal mining in front of the Deputy Commissioner’s office here, the SAD President said all sand mining activities occurring in Mohali were illegal as no mines were operational in the district in government books.

He said though mines had been auctioned and mining was being done, the same had not been given government clearances till now. “This means all mining occurring in Mohali is illegal and officers who are not taking action against the same will be punished as per law when the SAD-BJP forms a government in the State”.

Mr Badal also warned the district police that it should not protect Congress goons who were collecting goonda tax from all tractor trollies ferrying earth and from trucks carrying gravel. He said cost of one truck of sand had doubled from Rs 12,000 per truck earlier to Rs nearly 22,000 per truck hurting the interests of the common man.

Mr Badal said in addition goonda tax of Rs 5,000 per truck was being levied which was being facilitated by police officials. He urged the people not to pay this tax and oppose the same boldly, saying he would personally come to the spot if needed to stop this practice.

Stating that Congressmen were looting the State exchequer, the SAD President said the Congress government had first claimed that it would realize Rs 1,000 crore from sand mining but had collected only Rs 38 crore as of now.

He said in July 2019 under the new mining policy sand mines were auctioned off for Rs 309 crore after forming seven clusters to favour monopolization. He said Rs 80 crore was to be collected in each quarter and that even though two quarters had passed not a single paisa had been collected from the miners.

Mr Badal said environment clearance had been deliberately not given to the miners and they were allowed to mine sand illegally without paying one rupee to the State. “Illegal mining is even being allowed in forest areas and all Congress legislators are indulging in this practice and even beating officers who resist them like the thrashing given to Mining General Manager Tehal Singh Sekhon at Patiala”.

Dera Bassi legisalator N K Sharma while speaking on the occasion, said goonda tax was being collected in Mohali district by minister Balbir Sidhu, Deepinder Dhillon, Sandeep Sandhu and Kushaldeep Dhillon. He said the situation was such that all ‘shamlat’ land had been dug up in the district. “The sand mafia has not even left the Chhatbir Zoo area where excavations have been made up to depth of sixty feet”.

Mubarakpur Crushers Association President Amarjit Bansal and Vice President Rajinder Singh handed over a memorandum listing the goondaism being unleashed by Congress leaders against them as well as details of the false cases registered against them to the SAD President. Mr Badal promised to fight the injustice being meted out to them.