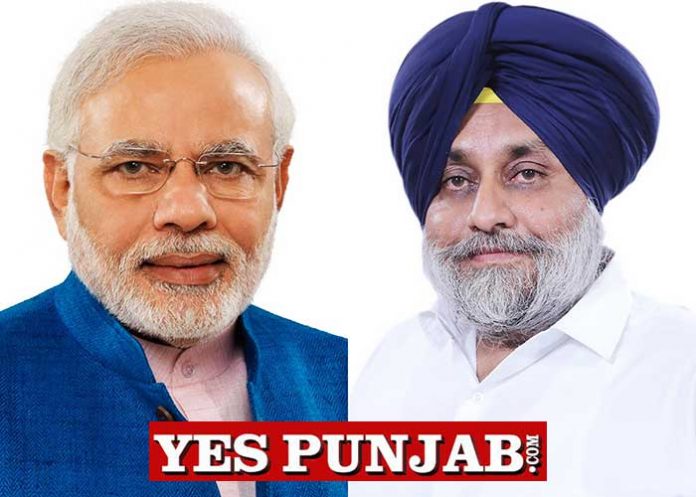 Chandigarh, October 31, 2020 (Yes Punjab News)
Shiromani Akali Dal (SAD) President Sukhbir Singh Badal today requested Prime minister Narendra Modi to intervene and direct the finance ministry to offer a comprehensive relief package to farmers instead of discriminating against them by issuing clarifications that agricultural loans would not be eligible for the interest on interest waiver announced by the union government last year.

In a statement here, the SAD President said the decision not to include the farming community in the ambit of the scheme which seeks to provide ex- gratia payment of the difference between compound interest and simple interest to borrowers for six months proved that policy makers were totally out of sync with grassroot realities.

“It is a sad day for Indian democracy if policy makers have become so out of touch with the agriculture sector that they do not realize that farmers bore the brunt of the COVID-19 pandemic.

Thousands of tonnes of fruits and vegetables simply rotted in the fields. Farmers who had made investments in poly and net houses suffered huge losses as their produce could not be marketed for months. Everyone associated with agriculture and allied activities like dairy farming lost money. Even paddy growers in Punjab suffered huge losses as they had to pay double for labour”.

Mr Sukhbir Badal said farmers were expecting complete waiver of their crop loans and waiver of interest on tractor loans as well as loans taken for other allied activities. “It is shocking that instead of doing this the Union government is not even ready to save them from compound interest being charged from them due to default in instalments.

The finance ministry has played a cruel joke on the ‘annadaata’ who put his life at risk to supply food to the nation during the pandemic. I urge the Prime Minister to direct the ministry to withdraw this discriminatory clarification and instead come out with guidelines for banks which offer concrete relief to farmers who are unable to repay crop loans and pay interest on other loans”.

Mr Badal said this announcement was being seen as a double whammy by the farming community which was still reeling from the ill effects of the central agri-marketing laws which had resulted in losses to maize and cotton farmers in Punjab and were working to the detriment of farmers across the country.

“Now we are being told by the finance ministry that the farmer did not suffer at all due to the pandemic and that he does not need any finance relief. This amounts to sprinkling salt on the wounds of the farming community which is already is already reeling due to forced distressed sale of food produce during the pandemic.

“I urge the PM to come out with a concrete package for the farming and allied community which should include waiver of crop loans and interest waiver on other loans including tractor loans.

The government should also partially write off loans taken to create infrastructure for allied activities. All this is needed not to only to give a boost to the agriculture sector but also help the rural economy back on track”, Mr Badal told the Prime Minister.