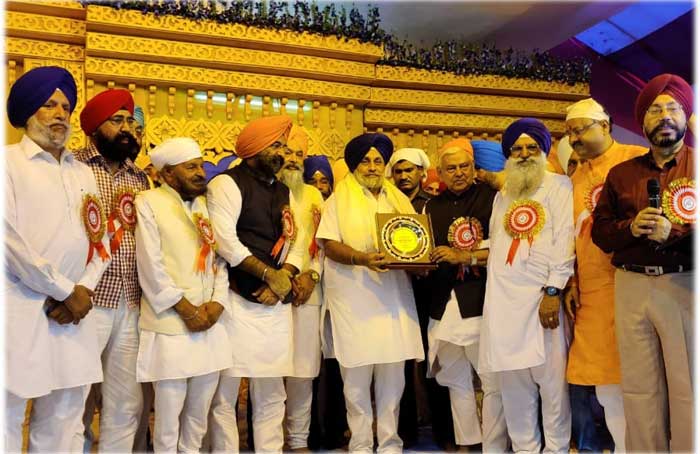 Shiromani Akali Dal (SAD) president S. Sukhbir Singh Badal today urged Jharkhand chief minister Raghubar Das to ensure reopening or transfer of all 1984 Sikh massacre cases of Bokaro to the CBI, even as he announced that the SAD would send a team of lawyers from the Supreme Court to study these cases before taking up the matter at the highest level.

Addressing a Gurmat Samagam as part of the 550th birth anniversary celebrations of Shri Guru Nanak Dev ji at Bokaro in Jharkhand, the SAD president more than 100 Sikhs were brutally killed in Bokaro at the instance of Congress goons in 1984.

He said it was unfortunate that not a single accused had been convicted and punished so far for such a heinous crime against humanity. “I urge the Jharkhand CM to set up a Special Investigation Team (SIT) immediately to reopen all 1984 cases and ensure they are reinvestigated and taken to their logical conclusion”.

He appealed to the entire Sangat to unite under the banner of SAD to get all wrongs done to the community corrected.

Speaking about the similar cases of Delhi and Kanpur where some bigwigs like Sajjan Kumar had been sent behind the bars while cases against other accused like Jagdish Tytler and Kamal Nath were expeditiously being concluded under the NDA government, the SAD president said the wounds of Sikhs cannot be healed until all accused of this gruesome crime are not punished by competent courts.

“We will fight for every victim family and justice would be delivered to them at all costs”. He said the SAD would send a team of lawyers from the apex court to Bokaro to thoroughly study all 1984 massacre cases.

On being asked about the opening of the Kartarpur corridor, The SAD president disclosed that the Corridor will be thrown open for the pilgrims on November 09 by the Prime Minister Shri Narendra Modi.

Terming it a historic step that would facilitate hassle-free access to all pilgrims to Shri Kartarpur Sahib Gurudrawa in Pakistan, the last resting place of Shri Guru Nanak Dev ji, S. Badal condemned the Pakistan authorities for imposing a $20 entry fee on each pilgrim visiting the holy shrine. “This entry fee is unjustifiable and should be revoked immediately,” he demanded.

The SAD president also appealed to the Bokaro Sangat to visit the holy city of Sultanpur Lodhi to participate in the celebrations of 550th Parkash Purb of Shri Guru Nanak Dev ji.

“You must show the rich heritage of Sikh religion to your children by visiting all monuments and memorials constructed in Punjab by the erstwhile SAD-BJP government headed by S. Parkash Singh Badal. Show them Virasat-e-Khalsa and other memorials as it will connect them with their roots,” he said.

Meanwhile, a Sikh delegation of Jharkhand met the SAD president at Ranchi early in the morning and urged him to expand the SAD by creating a unit of the party in their state. They described the SAD as the only political party that represents the Sikhs across the country. The delegation members included -Balbir Singh Saluja, member BJP Karyasamiti,