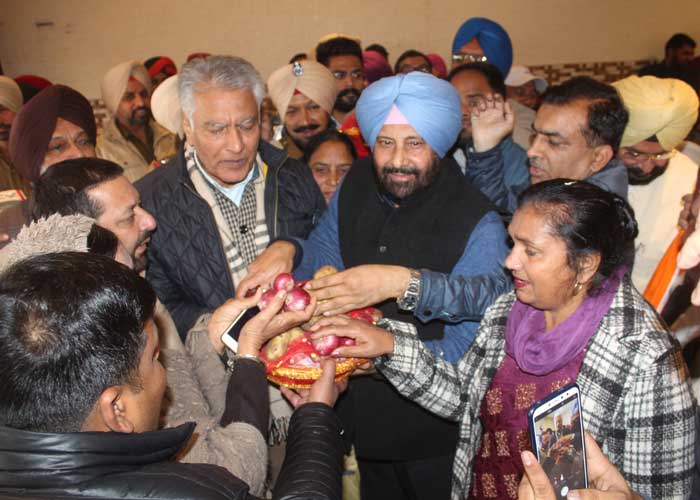 He added that the Congress party would never let the BJP to change the fundamental features of Indian Constitution.

While chairing a meeting with party workers here at Barnala, Mr. Sunil Jakhar said that Sukhbir Singh Badal is trying to save his post as president in Shiromani Akali Dal (SAD) by staging protests against the state government as it was he himself who once claimed that the dharna protests is the job of idles.

He also backed the stand of SAD leader and Rajya Sabha MP Mr Sukhdev Singh Dhindsa who has been attacking Sukhbir by terming his appointment as president undemocratic.

Mr. Jakhar said that only to save a post of minister in the centre, the leaders of SAD are not issuing any statements against the wrong doings of BJP in centre. He added that Sukhbir is a businessman but it is very sad to know that Parkash Singh Badal is also mum on these issues. He said that when Modi government stopped the share of Punjab from GST, the SAD leaders remained silent which show their reluctant behaviour towards Punjabis.

Congress president claimed that the NDA government has been regularly failing on all the fronts and to divert the attention of people, the BJP leaders have presented the CAA. He added that the BJP leaders are unsuccessfully trying to change the basic feature of the constitution which the aware citizens would never let them do it.

After the meeting, Senior Vice President PPCC Mr. Kewal Singh Dhillon and other leaders from Barnala gave onions and potatoes to their president for sending these to PM to show their protest against inflation.

Mr. Jakhar said that despite resolving the issues of common people, the BJP is master in distracting the people with its tricks. He added that it is tough time for Indian economy as GDP is at its lowest and youth is struggling for employment but the Modi government is trying to divide the country in the name of religions.

On this occasion, Mr. Kewal Singh Dhillon said that all the efforts will be made to strengthen the party in Barnala and work will be done on all platforms. He added that the party leaders are working hard to make the people aware of the policies and functioning of Congress party which would surely help the party to succeed swiftly in future elections.