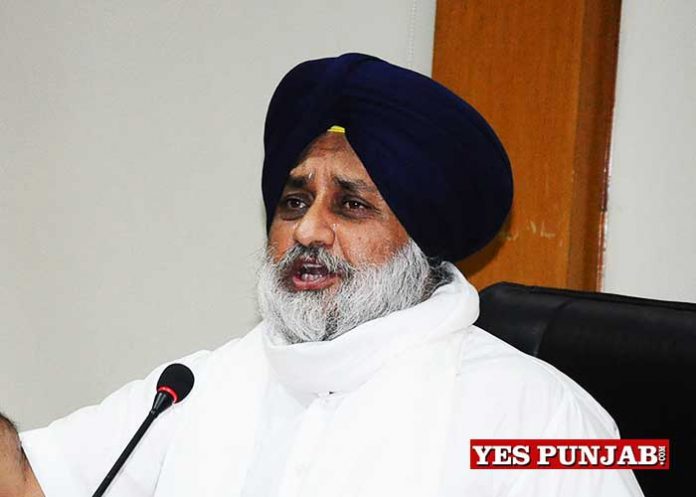 Chandigarh October 26, 2020 (Yes Punjab News)
The Shiromani Akali Dal president Sardar Sukhbir Singh Badal said here today that the stoppage of inbound goods trains in Punjab could amount to “an economic blockade of the sensitive border state” and shatter its already staggering economy apart, from causing unspeakable sufferings to the common people. He said that this approach smacks of ‘needless and ominous confrontation which will serve no one’s interest.”

“The decision to further extend the ban on goods trains in Punjab would completely devastate the entire business, trade and industry, apart from agriculture here. The decision needs to be reversed immediately. Do not punish the patriotic and peace loving people of Punjab for demanding their democratic rights,” said Mr Badal in a statement here.

The SAD president said that all the tracks where the trains in question are to run are open and functional. “There is no ground whatsoever to resort to such blanket ban on goods train services. These must be resumed immediately.”

Mr Badal vehemently pleaded against “the path of confrontation in dealing with the farmers’ agitation as this could inflict serious long term damage on peace and economic and social stability here. Confrontation would hurt all of us and would be a disservice to the nation,” he said

Mr Badal also said that the government of India should have opted for a negotiated solution to the issue and should have removed the apprehensions of the farmers’ in this regard. “In a democracy, the way to deal with popular demands and agitations is always through talks. Answering people’s demands and disaffection through vengeful reaction would further complicate the situation rather than resolving it,” warned the Shiromani Akali Dal chief.

Mr Badal also hoped that the farmers organisations would also keep the needs of the people of the state in mind and not disrupt any of the essential services in the state and thus avoid hardships to the common Punjabis, especially the poor. “ Whatever maybe our demands, Punjab belongs to all of us. Its welfare and progress is our collective responsibility,” said the Akali leader.