Home Entertainment Bollywood Stream on, over the top 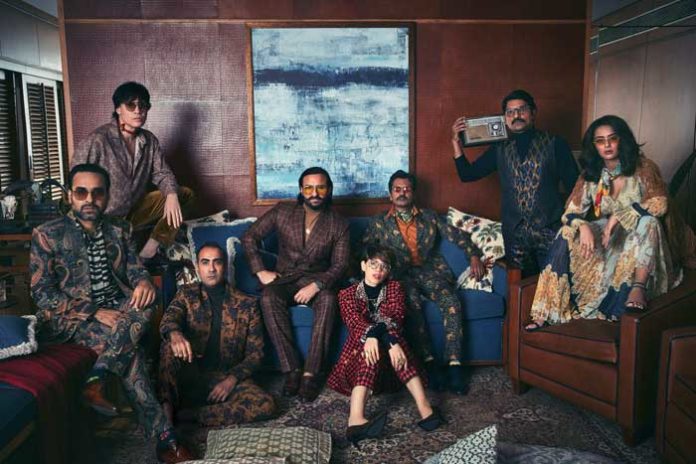 From epic comebacks to opening new chapters of history to adventurous ride into a fantastical land to intriguing new projects — stories dipped in myriad hues have been lined up to add strokes of diversity to the already diverse world of the streaming services.

Feeling a void after watching “Game Of Thrones”, “Stranger Things” season three, “Fleabag” season two, “When They See Us”, “Good Omens”, “Made In Heaven”, “Sex Education”, “Queer Eye” and “Delhi Crime”? Well, there’s still a lot to look forward to in 2019.

Here’s a list of biggest shows and movies to watch out for in the digital world:

SACRED GAMES 2
Will there be a nuclear war? What did Sartaj stumble upon? What was the underground bunker for? What role did Guruji play in the plot of destroying the city? Who killed Trivedi? These are some of the questions which will be answered with the second chapter of “Sacred Games” opening on August 15.

Saif Ali Khan will be back as Sartaj Singh, entwined in a conspiracy targeted towards destroying Mumbai. This time, he will be seen embarking on a journey of self-discovery. Nawazuddin Siddiqui will also return as gangster Ganesh Gaitonde with his quest to re-establish his power and position as the king.

Kalki Koechlin and Ranvir Shorey have also joined the world of “Sacred Games”. Nawazuddin has promised that the new season is packed with lots of surprises and twists.

BARD OF BLOOD
Superstar Shah Rukh Khan is entering the digital world by backing the series based on Bilal Siddiqui’s book “The Bard Of Blood”. Set against the backdrop of the Indian sub-continent, the show marks debut of Emraan Hashmi in the web space.

The multilingual Netflix series will tell the story of an expelled spy, Kabir Anand who is recalled from his new life as a professor in Panchgani to save his country and long-lost love. It will launch on September 27.

“Through a web show, we are not only pitching the content to the Indian audience, but to audiences in over 180 different countries. I am sure our audience will like it and I hope international audience like it too,” Emraan said.

THE MARVELOUS MRS. MAISEL: SEASON 3
Miriam “Midge” Maisel will continue navigating the world of comedy as well as trying to balance her personal life with her profession with season three.

Set in 1950s Manhattan, “The Marvelous Mrs. Maisel”, available on Amazon Prime Video, tells the story of Maisel who is trying to find her own voice after her husband leaves her. With music and lighter tones, the show by Amy Sherman-Palladino and Daniel Palladino, puts the spotlight on gender issues, and the disparity.

Amazon Studios head Jennifer Salke described the upcoming season as fantastic. “We will keep on following these character and dealing with complications,” Salke said.

Although no release date has been announced, it is expected to go live in November or December.

THE CROWN SEASON 3
The story has moved further along its historical timeline with Clair Foy stepping aside as Queen Elizabeth II to make way for Olivia Colman. Colman will be bringing the story of the reign of Queen Elizabeth II alive on the screen as an older monarch.

The third season will chart the years between 1964 and 1976, and it is being speculated that it will bring the Queen and Prince Philip’s marriage under the spotlight again. It is expected to be out in the second half of 2019.

CARNIVAL ROW
Orlando Bloom and Cara Delevingne will be seen tackling immigration and tribalism issues through the fantasy show. It tells story of a Victorian fantasy world filled with mythological immigrant creatures.

They live in fear of humans, and are forbidden from living, loving and flying with freedom. In this clash between humans and supernatural creatures, a human detective and a faerie become lovers. The series will go live on August 30 on Amazon Prime Video.

GLOW SEASON 3
Come August, and women will be back in the wrestling circuit as they head to the Sin City. Alison Brie, Kate Nash and Betty Gilpin amongst others will be returning as the female wrestlers, as the Gorgeous Ladies of Wrestling (GLOW), head to Las Vegas for their new live show. It is expected to premiere in August.

UNDONE
The show is being touted as the game changer when it comes to animated content. It explores the elastic nature of reality through its central character Alma, a 28-year-old living in Texas. Actress Rosa Salazar is leading the project as Alma, who winds up in a terrible car accident. Though she survives the accident, Alma realises that she has a new bond with time.

MINDHUNTERS SEASON 2
After getting overwhelming response to the first season, “Mindhunters” will be back to explore the world of crime and thrill. It focuses on interview-based behavioural research of FBI agents Holden Ford (Jonathan Groff) and Bill Tench (Holt McCallany) as they interview imprisoned serial killers. There’s a lot of buzz around the season season as the plot still remains a mystery. It will premiere in August.

THE RED DIVING RESORT
After retiring as Captain America in “Avengers: Endgame”, Chris Evans will be back to save people. But this time as a secret operative running a rescue effort in Ethiopia in “The Red Sea Diving Resort”.

The Netflix film tackles the refugee crisis in Sudan in the early 1980s. Based on a true story, it is about how a group of operatives rescue families facing genocide in the African country. It will go live on July 31.

13 REASONS WHY SEASON 3
It started as a story about a teen girl leaving behind 13 tapes explaining her decision to kill herself, and who pushed her in that direction. And it has evolved by putting spotlight on bigger issues like bullying, rape, sexual assault and school shooting.

It will be interesting to see how they tackle the subjects in the season three, which is expected to go live in October.

The buzz around the third season grew stronger with Netflix removing the controversial graphic suicide scene from the first season, two years after its premiere.

THE WITCHER
Dropping the cape of Superman, actor Henry Cavill will enter the world of magic and monsters with “The Witcher”.

Based based on Polish author Andrzej Sapkowsk”s novels, the show is set in a land called The Continent which was invaded by demons from a parallel dimension — which gave rise to a breed of monster killers called Witchers. It follows Witcher Geralt (Cavill), sorceress Yennefer (Anya Chalotra) and the mysterious young Ciri (Freya Allan) as they come together to form a union.

BREATHE 2
Actor Abhishek Bachchan will foray into the digital space with “Breathe 2”, and the makers say that he will don a ‘never seen before’ avatar.

It seems that the second season of “Breathe” will tell a new story and will not be a continuation of the first. The plot and release date is being kept under wraps.  (Agency)