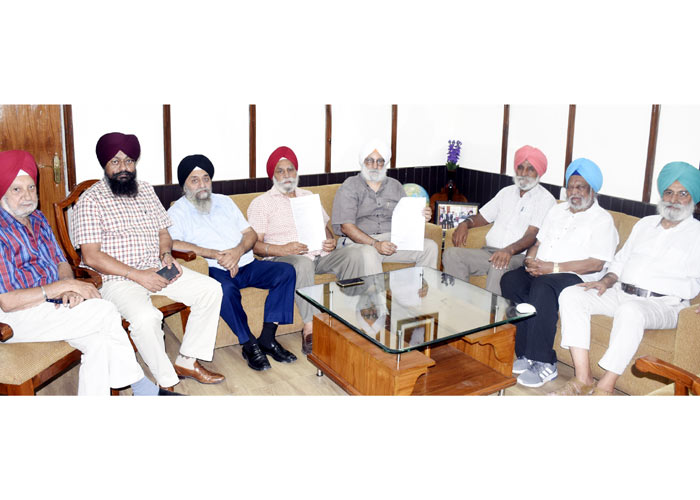 The Sant Singh Sukha Singh Management Committee today demanded a high level probe into the `illegal and fraudulent’ sale of lands bequeathed to Sahib Sri Guru Gobind Singh Ji to private parties. They said the revenue records collected so far point out to major sales on meagre amounts to the `favoured parties’, which were further re-sold the properties within a few days in `questionable manner’.

The Committee said that they had asked the present management of the School to explain why the properties were disposed off `illegally’ but instead of giving suitable replies, they locked the gates of the esteemed institution.

“During the course of the initial investigations, it has been proved that the two registries of the land were executed on December 19, 2017 in the name of one Hardev Kaur, wife of Kuljit Singh (Singh Brothers). The total lands of 940 square yard was sold to the above party for about two crores”, said Kathunangal adding that to protect properties is the primary duty of every citizen.

Gunbir Singh added that the above land was further re-sold out within six days to other private parties. “As per the provisions of the Tamliknama, the land can not be sold as it was in the name of the Guru Sahib and the lands were to be used for the purpose of educational pursuits. `This is just a tip of the iceberg. There are many such sales which have taken place”, said he.

He said they have demanded the high level probe and so they will be meeting Deputy Commissioner Amritsar and the SDM concerned for cancellation of the registries. The Committee had recently held its meeting outside the SSSS School Campus when they were not allowed to enter the premises of the school management recently. “We have no other interest but to safeguard the properties”, said Gunbir Singh.

The Committee comprises of 6 members each from Sri Guru Singh Sabha Society, Amritsar and Khalsa College Governing Council, Amritsar and the Committee formulation is as per the Tamliknama which states that “As, Sri Guru Gobind Singh Ji, was not in a bodily form at that time on this Earth and as such according to the religious traditions, the Khalsa is regarded as his symbol in which He dwells, therefore, the Khalsa College Amritsar was given the possession of the properties on His behalf”.