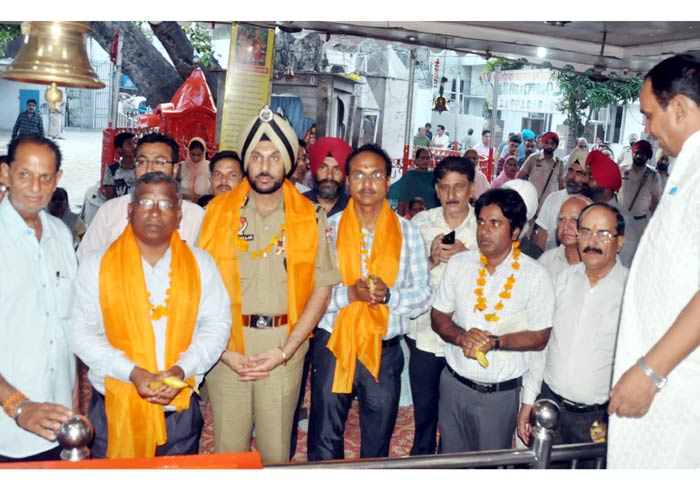 Presiding over a meeting with the various organizations in the temple complex here today, the Deputy Commissioner , Commissioner of Police and MC Commissioner said that district administration would make elaborate arrangements to ensure that the pilgrims coming to this holy shrine for paying homage do not face any sort of inconvenience. They said that this fair was an important event in the region and every effort must be made to ensure that pilgrims offer their prayers during the fair in a smooth and hassle free manner. They also exhorted the people to participate in this fair with full religious gaiety and enthusiasm besides assuring fulsome support and cooperation to everyone coming at this sacred place.

During the meeting it was decided that the General Manager of the Punjab Roadways to deploy Mini Buses from Railway Station, Bus Stand and other places to ferry the pilgrims to the shrine during the fair and the Public Works Department would ensure proper safety of the pilgrims by inspecting the stages and swings to be installed during the fair. In order to ensure proper cleanliness around the temple premises, it was decided that the Municipal Corporation Jalandhar (MCJ) to appoint Safai Sewaks round the clock in rotation and proper cleanliness must be ensured in and around the temple by lifting the garbage on time. Similarly, the Civic body would also make adequate arrangements for supply of potable drinking water and installation of temporary public toilets.

It was also decided that the Health department would depute its teams along with ambulances permanently during the fair to impart Health services to people and the PSPCL would ensure interrupted power during the fair by making adequate arrangements for power back up.