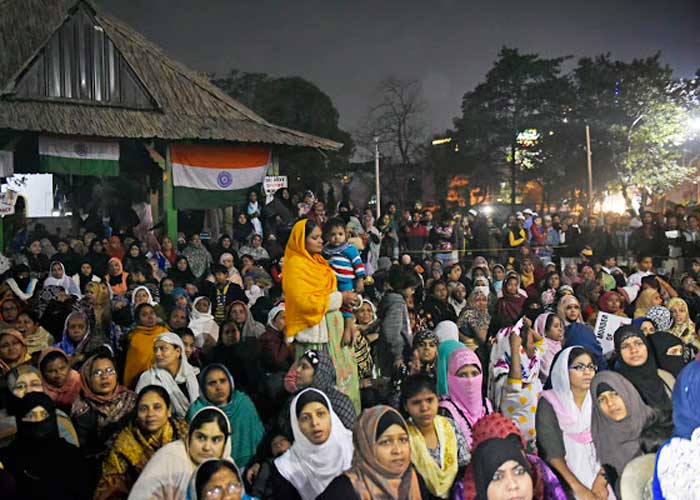 Notwithstanding a nagging rain and concern over the happenings in Delhi, spirits continued to soar at the anti-CAA protest site in south Kolkata’s Park Circus Maidan, as a hundred women with posters and banners, and their babies on their laps, stood vigil on the 50th day of the protest on Tuesday.

Songs of unity, patriotism, and slogans against the new Citizenship (Amendment) Act and a proposed National Register of Citizens (NRC) exercise keep the protesters charged, with the constant clappings enhancing the mood of participation and camaraderie.

However, the crowd seemed to have thinned compared to what it was in the first half of the last month when the sit-in started.

“The spirits are still high here. We will continue to sit till the time we get justice.

“Because of the ongoing examinations and the nagging rains there are fewer people now. Also, people are protesting in their respective localities now. But in evening 2,000-3,000 people gather, Alam told.

The violent turn of events for the past two days in parts of Delhi due to clashes between the pro and anti-CAA groups, is being followed almost minute by minute here.

The Delhi violence has already taken a toll of at least seven lives and left over 100 injured.

“The Delhi violence is despicable. Ours is a silent protest everywhere. But despite that the protesters are being harassed,” said Alam.

She appealed to the central government to play an ahonest role.

“Whatever happens in Delhi, we will continue our sit-in keeping full faith in the principles of peace and non-violence. After all, it is a movement to claim our rights as citizens,” she said.

On January 7, taking a page out of the anti-CAA gathering in Delhi’s Shaheen Bagh, some women from the largely muslim neighbourhood Park Circus descended on the local park expressing their anxiety, disappointment and anger about the goings on in the country,

They started a protest against the CAA, NRC and the National Population Register exercise, as also the “state repression” on the anti-CAA protesters in Uttar Pradesh.

Their stock grew as the days passed. First their friends, families and acquaintances came, followed by women belonging to all societal strata from various areas of the city – be it Topsia, Ripon Street, Khiddirpore, Metiaburuz or Prinice Anwar Shah Road.  (Agency)