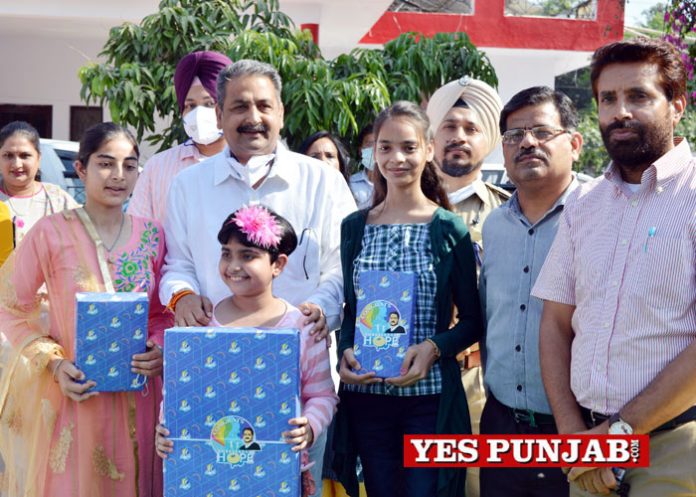 The cabinet minister specially visited Pathankot and Jalandhar to give away the prizes to the winners of record breaking online competition, ‘Ambassadors of Hope’ and said that he will leave no stone unturned to boost the morale of the school going students.

Exhorting the first, second and third prize winners of Jalandhar, Kapurthala, Tarn Taran, Pathankot, Amritsar and Gurdaspur districts to achieve further heights in future, Mr. Singla said that one should always have intent of learning and students should not be afraid of mistakes and take them in a positive manner in life to meet the aim.

He said that the primary objective of ‘Ambassadors of Hope’ engaging the students in a constructive activity in an atmosphere of abject negativity due to COVID-19, has been achieved.

The Cabinet Minister informed that in view of the threat of COVID-19 pandemic, they have decided to honour the winners in a phased manner. As the ‘Ambassadors of Hope’ winners from 7 districts Barnala, Bathinda, Faridkot, Mansa, Patiala, Sangrur and Sri Muktsar Sahib have been bestowed with their during the Independence Day function at Sangrur while, the winners from five more districts were felicitated at Chandigarh in a special function.

He said that such brief ceremonies would be held soon at other locations to honour the winners of the remaining districts with attractive prizes.

The Cabinet Minister said that apart from a total 66 main prizes, as many as 1000 consolation prizes were also being given to the winners in all 22 districts under the ‘Ambassadors of Hope’.

Divulging further details, Mr. Vijay Inder Singla said that as many as 1,05,898 school going students have shared their videos for ‘Ambassadors of Hope’, the campaign which was launched for students of Punjab to share their creativity during lockdown. He categorically said, “Winners have been selected strictly on merit basis.”

The cabinet minister said that the campaign created a world record as a record number of students participated in an online video competition which concluded in eight days.

“It is heartening to see the response we have got from the children. For me every child is a winner. I am grateful to all the students who shared innovative ideas through videos on just one call and appreciating the efforts put in by their parents, teachers and school principals in guiding and motivating them,” said the education minister, while interacting with the shining-stars and listening to their creativity, which brought laurels for them.